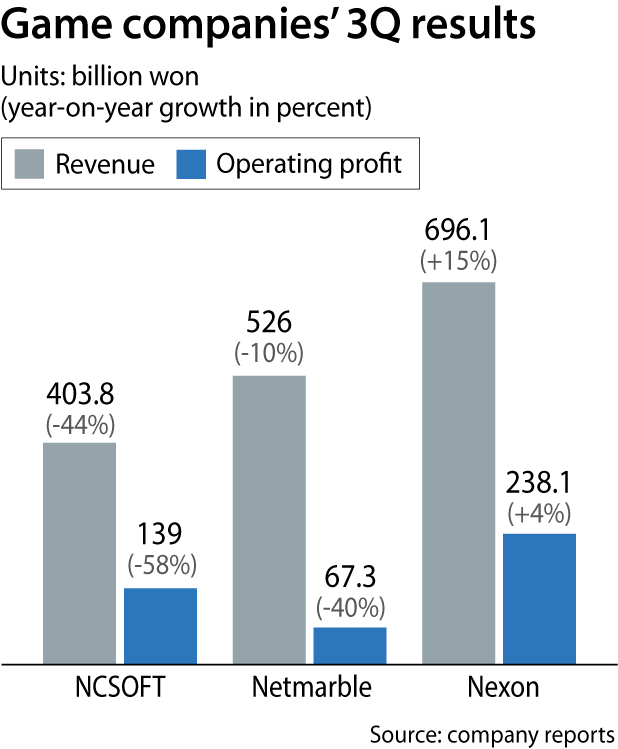 Korea’s top three game developers suffered, as a group, an earnings drop year on year in the third quarter, with only Nexon reporting a rise compared to the same period in 2017.

Earnings of Netmarble and NCSOFT fell year on year as they both released a smaller number of games in the local market. Industry watchers say that may be the result of the 52-hour work hour that went into effect on July 1.

NCSOFT released no new games in the local market this year. Some projects were postponed as the company decided that more time is needed to improve the quality of the games before presenting them to users, said a company spokesperson.

The fall was also in part the result of a strong comparison period, he added. NCSOFT had a record-breaking third quarter 2017 with the success of its Lineage M mobile game.

Netmarble’s operating profit for the third quarter fell 39.8 percent to 67.3 billion won, while revenue was 526 billion won, down 9.6 percent year on year. Netmarble released a smaller number of games in Korea this year.

On a positive note, Netmarble noted in its third quarter report that sales increased in large game markets like the United States and Japan. The company’s foreign sales reached 382.4 billion won in the July-September period, taking sales in overseas markets, as of the third quarter, to 1.07 trillion won, a 20 percent increase compared to the same period last year.

Nexon was the only one of the three to report year-on-year growth in both revenue and profit. The company, with stock trading in Japan, brought in 696.1 billion won in the year’s third quarter, a 15 percent increase year on year. Operating profit grew 4 percent to 238.1 billion won during the same period.

But with regulations on the rise, local game companies are operating in a tough business environment.