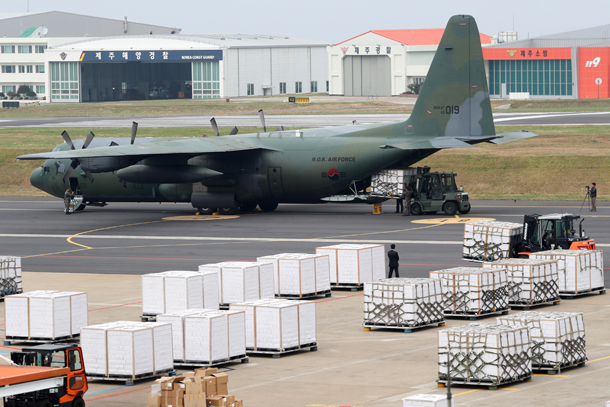 Military cargo planes are loaded with boxes of Jeju tangerines at Jeju Airport before flying to Pyongyang Sunan International Airport on Sunday morning. A total of 200 tons of tangerines were to be flown to the North over two days packed in 20,000 separate boxes, each weighting 10 kilograms (22 pounds). The tangerines are special gifts in return for the mushrooms that Pyongyang sent to Seoul in September. [NEWS1]

The Blue House has sent hundreds of tons of tangerines to Pyongyang as a special gift in return for the mushrooms that the North sent to Seoul in September.

“200 tons of tangerines will be transported in four trips over today and tomorrow,” Kim said, adding that for each trip a group of four C-130 aircrafts would be mobilized.

Vice Unification Minister Chun Hae-sung and Suh Ho, presidential secretary for unification policy, also traveled with the tangerines.
The cargo plane returned from its first trip to Pyongyang at 1 p.m. After re-loading, it left Jeju at 3 p.m. and returned again around 8 p.m. on Sunday night.

Another two trips will be conducted at the same time on Monday to complete the delivery of all 200 tons of tangerines.

“We have selected tangerines as gifts considering that it is a rather difficult fruit to obtain for North Korean residents,” said the spokesman, adding that such a large number of fruits were sent in the hope that more North Koreans would be able to enjoy them.

The two tons of mushrooms were distributed to South Korean families who have been separated from their loved ones in the North since the 1950-53 Korean War and who have not been able to attend a family reunion event. Each family was given 500 grams (1.1 pounds) of North Korean mushrooms.

The fact that Moon gave Kim the Jeju tangerines raised speculation he might invite Kim to the island if the North Korean leader makes a reciprocal visit to the South as agreed in the Pyongyang Declaration.

The two sides agreed that Kim should make the crossing “at an early date at the invitation of President Moon Jae-in.” The president said during the Pyongyang summit that “an early date” meant by the end of this year.

Kim’s mother’s family is thought to come from Jeju and some of his distant relatives are reportedly buried there. During a hike with Blue House reporters on Oct. 28, Moon said he could invite Kim to Jeju if he made the reciprocal visit to Seoul.

While the Jeju tangerine delivery has rekindled expectations that Kim may soon visit the South, it remains to be seen whether the summit will actually take place this year.

Kim’s second summit with U.S. President Donald Trump is planned to be held next year, although the exact date and time have not been determined.

Without a specific agreement between Kim and Trump on the North’s denuclearization, Moon and Kim are limited in their discussions on inter-Korean cooperation, experts say.