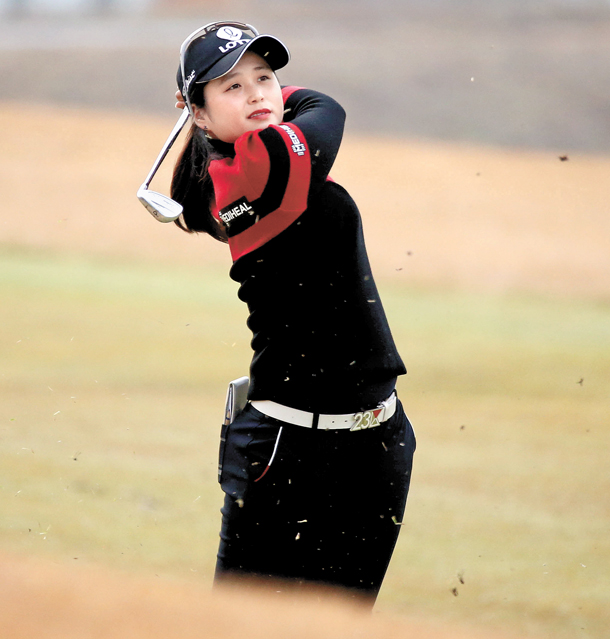 Choi Hye-jin watches her shot during the final round of the 2018 ADT CAPS Championship in Yeoju, Gyeonggi on Sunday. [KLPGA]

Months before KLPGA Tour rookie Choi Hye-jin announced her professional debut, she had already made a name for herself by winning two tournaments as an amateur. Despite the high expectations from her successful amateur career, Choi managed the pressure and has ended her first season as the KLPGA Tour’s Player of the Year and Rookie of the Year.

At the season-ending 2018 ADP CAPS Championship, Choi finished tied for sixth at four under par, 212, to secure her Player of the Year award on Sunday. Park Min-ji won the tournament after defeating Park You-na on the first playoff hole.

Choi, who started playing golf in the third grade, has been a member of the Korean national team since 2014 and is only the second player ever to hold a spot on the national team for four consecutive years.

As a member of the national team, Choi has played in four KLPGA Tour events under invitation, winning twice and getting one runner-up finish. Choi was the first player since Kim in 2012 to win a KLPGA tournament as an amateur golfer, and the first since Lim Sun-wook in 1999 to win two.

Choi also left a strong impression on the LPGA Tour by finishing runner-up at the U.S. Women’s Open in July, 2017, which she also played in as an amateur. Given her success, there were high expectations for Choi’s professional career, but it took eight tournaments for her to pick up a win.

Though Choi started playing on the KLPGA Tour in 2017, she was still considered a rookie in the 2018 season as she competed as a professional only in the second half of the season last year. Because of this, she became the first rookie to ever win a season opener, which she did at the Hyosung Championship with SBS in Vietnam in December, 2017.

Choi added another victory in June at the BC Card and Hankyung Ladies Cup 2018. In addition to the two victories this season, Choi had 16 top-10 finishes. Her consistency allowed her to rank as high as ninth in the women’s world ranking in July.

This week, Choi is ranked 21st.

“I’m going to focus on strengthening over the winter, work on my shots and short game,” Choi said. “My goal next year is to be the money leader.”

Aside from Choi, Lee So-young has won the most tournaments on the KLPGA Tour this season, with a total of three wins. Lee Jeong-eun, who won six different titles on the KLPGA Tour last season, has once again had a successful year on the KLPGA Tour, winning the lowest scoring average at 69.871 and topping the money ranking.

In addition to Lee Jeong-eun’s dominance on the KLPGA Tour, she also saw success on the LPGA Tour, where she won the Tour’s Q-School Series on Nov. 3. By winning the qualifier, Lee now has an option to compete full-time on the LPGA Tour for the 2019 season, but has yet to announce her decision.

The 2018-19 KLPGA season will start in Vietnam on Dec. 7 at the Hyosung Championship with SBS Golf.