Korean Zombie returns, gets knocked out in final second

Korean Zombie returns, gets knocked out in final second 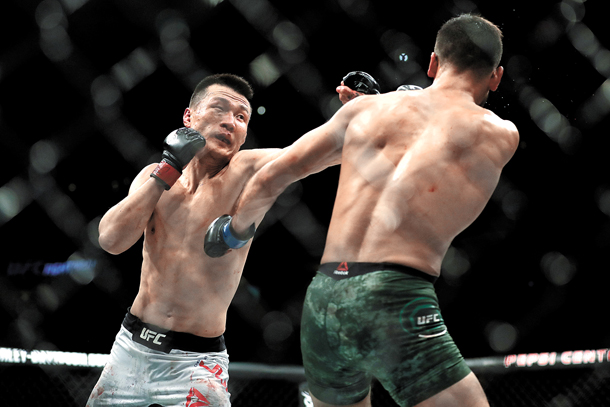 Jung Chan-sung, left, competes against Yair Rodriguez during the UFC Fight Night 139 at the Pepsi Center in Denver, Colorado on Sunday. [GETTY IMAGES/YONHAP]

With only one second left on the clock in the final fifth round, Jung, better known by his nickname “Korean Zombie,” took an elbow to his chin from Rodriguez and fell to the ground in the main event at the UFC Fight Night 139 at Pepsi Center in Denver on Saturday.

This was Jung’s second loss in the UFC, the U.S.-based MMA organization which he joined in 2011, and his fifth overall loss in his MMA career. Jung’s last loss was in August 2013, when he fell to Jose Aldo of Brazil in the UFC featherweight title bout.

The latest contest was Jung’s first UFC action since February 2017, when the 31-year-old knocked out Dennis Bermudez after completing mandatory military service. Jung then prepared for a bout against Ricardo Lamas, but he ruptured the anterior cruciate and medial collateral ligaments in his right knee, among other injuries, during training in June 2017, and was forced to sit out the match.

Jung, who now has an MMA record of 14 wins and five losses, was originally set to face Frankie Edgar at the UFC Fight Night 139, but the American fighter was dropped from the bout due to injury and was replaced by Rodriguez just two weeks before the scheduled bout.

Against Rodriguez, who is known for his taekwondo-based skills, Jung earned points from the start with his punches. The two fighters traded bursts of momentum in their bout, but Jung was believed to be up on multiple score cards by judges after landing more accurate attacks.

Seconds away from earning a possible split-decision win, Jung decided to throw down punches with Rodriguez instead of holding back. But the 26-year-old Mexican was declared the winner at the last moment as he landed a no-look uppercut elbow - which almost seemed accidental - that left Jung out cold on the octagon. Rodriguez improved his MMA record to 11-2 with his latest win.