Short-track team back on form at World Cup

Short-track team back on form at World Cup 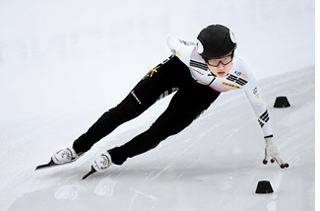 In the women’s competition, Choi Min-jeong led the team with two golds. She started with a win in the women’s 1,500 meters on Saturday, clocking 2 minutes and 20.859 seconds, finishing .253 second ahead of her teammate Kim Ji-yoo.

Following Choi’s gold on Saturday, she had another strong finish to complete the tournament by winning the women’s 3,000-meter relay race. Teaming up with Choi Ji-hyun, Kim Ji-yoo and Noh Ah-rum, Korea completed their race in 4 minutes and 6.852 seconds, finishing .144 seconds ahead of Russia.

Korea slowly made their way through the pack with six laps remaining in the race. Then, after the Netherlands and Russia collided, Korea claimed second place before Choi sped up in the last few laps to lead Korea to another gold medal finish in the women’s relay.

“I’m very pleased and excited to have a gold, but I think I got a little bit lucky today,” Choi was quoted as saying on the ISU website. “I did not expect this result because I have been struggling this season. I got a knee injury earlier this year so I’m finding the season really hard so far.”

Although Choi won, she said she is not yet at 100 percent. Choi is hoping that she’ll be back in peak form by the World Championships in March next year, scheduled to be held in Sofia, Bulgaria.

“The power and speed that I need is not yet coming back,” Choi was quoted as saying. “Maybe I will be back to my best by March.”

Two-time Olympic gold medalist Shim Suk-hee didn’t compete in the second World Cup due to an injury during the first leg of the World Cup in Calgary, Canada. During the 500-meter race, Shim hit her head and had to return to Korea suffering from constant headaches.

At the first World Cup, Shim picked up silver in the women’s 3,000-meter relay race.

On the men’s side, Hong Kyung-hwan won a surprise gold in the men’s second 1,000-meter race, clocking 1 minute and 23.872 seconds. This is Hong’s first gold in a senior World Cup race. With a win, Hong is now ranked fourth in the overall World Cup 1,000 meters standing.

Hong, who won the World Junior Championship in March, joined the national team for the second time this year after finishing third in the Korean national team qualifier in April.

Lim Hyo-jun, who won gold in the men’s 1,500 meter at the PyeongChang Games, won silver in the men’s 500-meter race, finishing .065 seconds behind Wu Daijing of China. Wu set a new world record by finishing his race in 39.505 seconds.

The national team will return to Korea to train until the third leg of the ISU World Cup race in Almaty, Kazakhstan on Dec. 7.