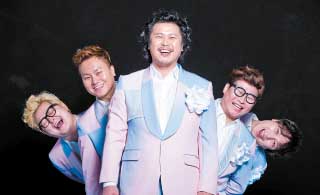 Indie boy band Rose Motel is no more, but the reason for their breakup remains unclear.

“The group is disbanding after seven years of working as a team due to differing opinions between members,” the group’s agency Roxtamuzik & Live said in a statement on Monday. “The breakup of the group follows the expiration of their contract with us.”

The agency also added that members Yuk Jung-wan and Kang Jun-woo will continue as group, under the new band name Yuk Jung-wan Band.

Member Im Kyung-sub, however, denied the agency’s announcement, saying on social media that he and two other members were pushed out of the group.

“I want to make some corrections to the agency’s announcement,” Im wrote. “The two members [Yuk and Kang] told the other three to leave the group.”

Following Im’s post, the agency admitted the conflict among the members and said that members Yuk and Kang wanted to continue under the name Rose Motel, but the other three members opposed, so they teamed up under a new band name, Yuk Jung-wan Band.

Rose Motel - made up of Yuk, Kang, Im, Bae Sang-jae and Yun Jang-hyun - debuted in 2011 with their song “Bong-sook Ah.” The group became well-known after appearing on KBS’s survival show “Top Band 2” in 2012, where they first performed their hit song “Bong-sook Ah.”