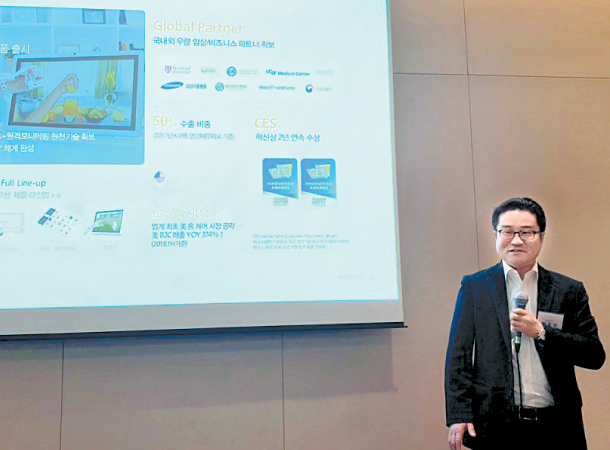 Neofect, a medical technology start-up, will debut on the junior Kosdaq bourse this month, a listing that could potentially raise up to 22.5 billion won ($19.8 million).

Ban Ho-young, CEO of the Gyeonggi-based company, announced the details of its initial public offering on Monday, saying that the proceeds of the listing will be used to bolster product line-ups in the global market.

“We aim to swiftly enter the global market in retail as well as corporate businesses through the IPO,” he said on Monday.

The move came after the company filed an application in July for an initial public offering (IPO) on the bio and tech heavy index and passed a preliminary screening in September.

A total of 1.8 million shares will be put on sale with an estimated offering price per share set between 10,000 won and 12,500 won. The total market capitalization will be around 100 billion won.

Neofect was initially valued at 70 billion won earlier this year. A total of 11.7 million shares will be offered.

Korea Investment & Securities was selected to manage the listing process.

The anticipated valuation at 100 billion won factors in the high potential of the technologies that Neofect includes in its products, including the NeoMano, ComCog and Rapael Smart Glove.

Ban said that the number of patients with neurological disorders has been on the rise, a factor that will push up demand for rehabilitation devices.

As for technological standards, the government-certified technology assessment agency gave Neofect the highest rating in June before it applied for the listing.

Its shortcoming lies in profitability. The company has yet to generate an operating profit.