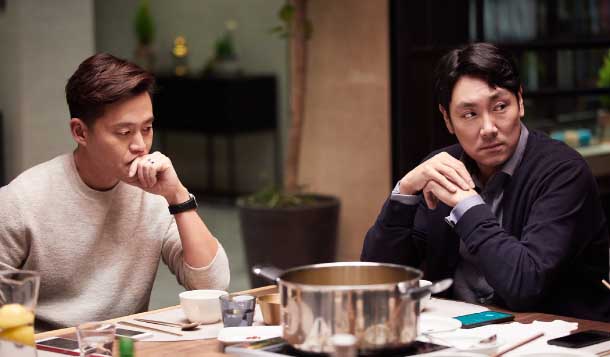 Despite tough competition from new releases starring popular celebrities, “Intimate Strangers” stayed atop the weekend box office for its second straight weekend, and was again followed by “Bohemian Rhapsody” in second place spot.

Actor Ma Dong-seok’s “The Villagers” debuted at third while the singer-turned-actor Son Na-eun’s “The Wrath” arrived at fourth.

From Friday to Sunday, “Intimate Strangers,” a remake of the 2016 Italian film “Perfect Strangers,” sold almost a million tickets at 1,324 screens, making up 43.2 percent of the nation’s weekend’s ticket sales.

In its second weekend, the comedy drama sold a total of 3.37 million tickets, with its total sales nearing 30 billion won ($27 million).

Featuring stars Yoo Hae-jin, Cho Jin-woong, Lee Seo-jin and Yum Jung-ah, the movie unfolds as a group of childhood friends and their spouses gather one night for a dinner, and play a strange game of revealing every text, phone call and social media notification that pop up on their smartphones throughout the time they are spending together.

Though the game starts off exciting, it leaves everyone feeling disappointed and betrayed by the end of the night.

Like last weekend, Freddie Mercury biopic “Bohemian Rhapsody” came in at second, but had a stronger performance than the previous weekend.

The story of British rock band Queen sold 784,000 admissions at 1,098 screens over the weekend. The film has sold a total of 1.84 million tickets since its release on Oct. 31, despite critical reviews.

The movie depicts the band’s rise to fame and popularity, as well as the struggles Freddie had with drug use and revealing his sexuality.

Ma’s “The Villagers” debuted in third, with 352,000 admissions sold at 730 screens. Co-starring Kim Sae-ron as a high school girl whose friend has suddenly gone missing, the movie depicts Ma as a physical education teacher hired at a high school in a small town.

Together, the duo digs into the case of the missing girl, which the rest of the town seems to be negligent of.

Coming in at a distant fourth was “The Wrath,” a remake of the 1986 historical horror masterpiece “Woman’s Wail.” Released on Thursday, the film sold 43,000 admissions in its first weekend.

Set in the Joseon Dynasty (1392,1910), the movie follows a girl named Ok-bun (Son), who happens to stumble into a cursed house, where a series of mysterious killings occur. Seo Young-hee of “Shadows in the Palace” (2007) co-stars in the movie. 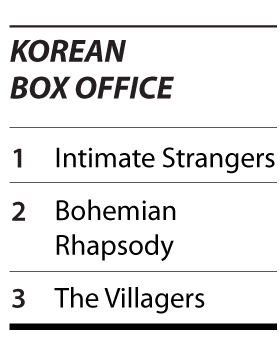 The biblical drama film, “Paul, Apostle of Christ” rounded out the top five, with 36,000 tickets sold.

The period zombie thriller “Rampant,” starring Hyunbin and Jang Dong-gun appear, which was sold to 74 markets at the American Film Market, continued its poor performance in Korea. In its third weekend, it fell to seventh after receiving bad reviews from critics and viewers alike.