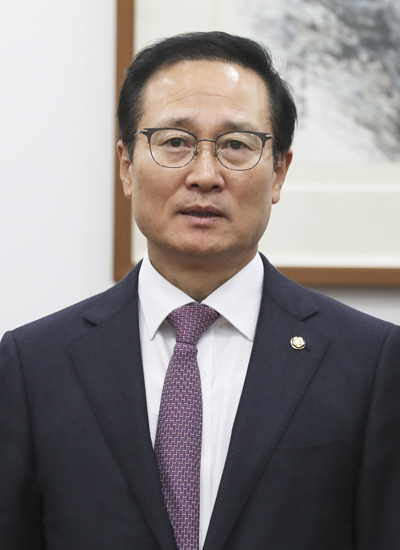 Hong Young-pyo, floor leader of the ruling Democratic Party, is being targeted by unionists accusing him of selling them out - despite his background as a labor activist.

On Thursday, a group of 50 members of the General Motors Korea union went to Hong’s district office in Bupyeong District in Incheon to carry out a sit-in protest. They demanded the lawmaker clearly oppose the U.S. carmaker’s spinning off its Korean unit’s R&D division, which the union sees as the first step in GM leaving Korea altogether. As of Monday, GM workers were still camped out in Hong’s regional office.

The bitterness is a surprise given that Hong built his reputation in politics as an advocate for labor rights. As a labor activist, he belonged to the Korean Confederation of Trade Unions, one of the two major umbrella labor unions in the country.

But as the ruling party’s No.2, Hong has to defend policies that benefit the company’s managements and go against the wishes of unions.

The labor union claims a separate R&D center will eventually result in the ending of production in Korea, resulting in massive layoffs. On Oct. 19, the automaker approved the plan in a board meeting despite the union’s opposition.

During a government audit Monday at the National Assembly, GM Korea CEO Kaher Kazem said that the company “has no plan to withdraw from Korea.” He assured lawmakers the spinoff is part of GM’s plan to stay in Korea longer than an initially promised 10 years.

GM Korea’s union is demanding that Hong act more aggressively to oppose the spinoff, a demand the DP floor leader has not accepted.

Another thorny issue is allowing companies to increase or decrease their workers’ maximum working hours depending on the amount of work needed at a given time.

That idea was raised as businesses struggled to adapt to a shorter workweek introduced this year, which lowered the maximum weekly working hours from 52 from the previous 68.

For example, a company that makes air conditioner parts could increase its working hours to more than 52 hours a week during the high-demand summer season and correspondingly decrease them during the winter.

The KCTU made its opposition to the idea clear, claiming it would undermine working conditions for employees.

Facing strong backlash from the KCTU over government policies aimed at helping businesses, Hong went out of his way to say Wednesday, “Labor unions should participate in discussions [to improve economic conditions], not oppose every policy no matter what.”