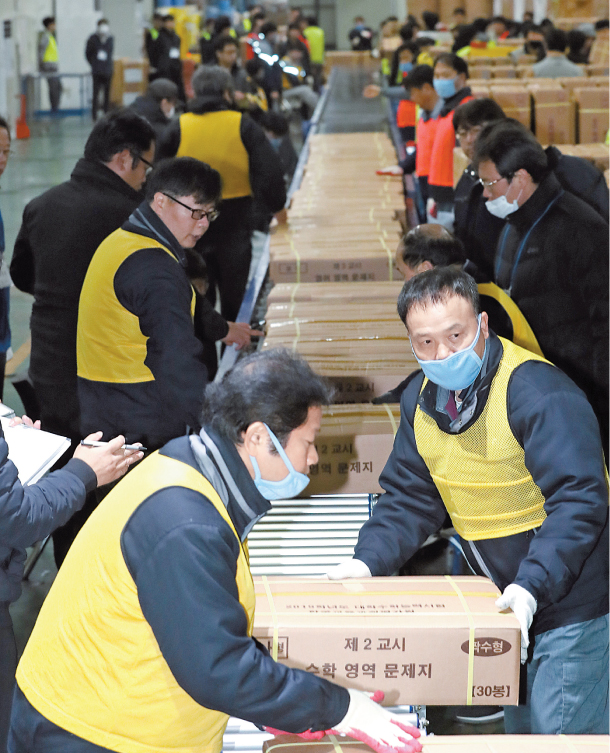 At a printing factory in Sejong on Monday, workers move boxes of question and answer sheets for the College Scholastic Ability Test (CSAT), loading them onto trucks which will deliver them to testing sites across the country. Students will take the CSAT on Thursday. [YONHAP]

The Seoul city government asked everyone residing in Seoul to comply with the transportation rules in consideration of the students taking one of the most important exams of their lives.

The transportation plans include an increase in the number of subway trains, buses and taxi services on the day of the exam and special cars will be stationed around the city to give emergency free rides to students running late.

To avoid possible delays due to trains breaking down, 16 spare subway trains will be on standby. City and town buses will operate with minimum intervals from 6 a.m. to 8:10 a.m. An additional 16,000 taxis will be fielded around the city from 4 a.m. to noon in order to transport students to their destinations.

Some 790 public and privately owned vehicles will be placed near public transportation stations to give free rides to students who are running late. Students in need of this service should look for vehicles with a “student transportation” signs on their sides.

Call taxis will prioritize students who have physical and mental disabilities on the day of the CSAT. Students who wish to use these services are advised to call 1588-4388 a day before the CSAT to make arrangements.

To make sure no students arrive late because of traffic, the city government has delayed the starting time for public corporation and government workers from 9 a.m. to 10 a.m.

Everyone is encouraged to start their commutes Thursday after 8:10 a.m. - the time the doors for all testing sites are supposed to close. On the day of the CSATs, automobiles are prohibited from parking within 200 meters (656 feet) of any testing site.

“We will provide transportation support to all 130,000 students taking the CSATs in Seoul so that they will be able to focus only on their tests [and not worry about getting there in time],” said Goh Hong-seok, the deputy mayor for City Transportation.

This year, the Ministry of Education warned students not to bring any digital devices to the testing sites. Students are not allowed to bring Bluetooth earphones, electronic cigarettes or any device that has an LED screen and a GPS tracking function.

In addition, students are only allowed to bring analog watches which should be confirmed with the test supervisor before the tests begin. Last year, a total of 72 people were caught cheating using electronic devices.