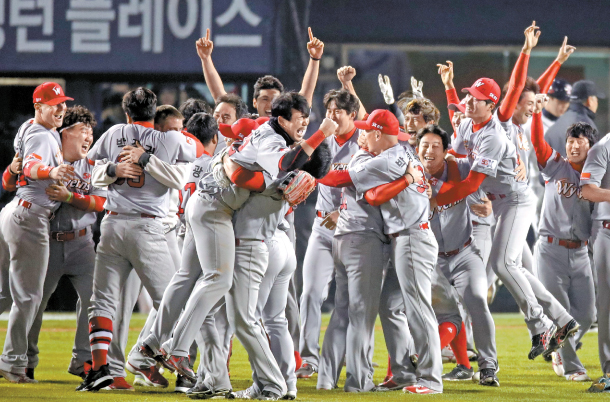 SK Wyverns players celebrate their Korean Series victory over the Doosan Bears following a 5-4 win in Game 6 at Jamsil Stadium in Seoul on Monday night. [YONHAP]


After eight long years of waiting, the SK Wyverns are once again the Korean Series champions.

The Wyverns defeated the Doosan Bears 5-4 in 13 innings on Monday at Jamsil Stadium in southern Seoul, winning their first championship title since 2010.

The Wyverns started off strong, getting on the board at the top of the first to kick things off with the score at 1-0. A home run from Kang Seung-ho in the fourth inning saw the Incheon club pull ahead with a 3-0 lead, while starter Merrill Kelly kept the Bears from scoring.

The Bears finally found their claws at the bottom of the sixth, with Hur Kyoung-min quickly getting on base before Kelly walked Jung Soo-bin. With Hur in scoring position, Choi Joo-hwan hit a double down the left field line. Yang Eui-ji followed with a two-run single, bringing the score to 3-3 at the top of the seventh inning.

The Wyverns came within inches of scoring at the top of the eighth, as Kim Jae-hyun was tagged on the leg by Yang moments before he touched the plate. A single from Kim Sung-hyun had put Kim Jae-hyun in scoring position, and Doosan center Jung only managed to get the ball to Yang when the runner was already on the ground and sliding. Kim Sung-hyun was originally called safe, but a video challenge from the Bears overturned the decision.

The tables finally turned at the bottom of the eighth. With runners on first and third, Yang sent a go-ahead sacrifice fly to center field, allowing Jung to make it home to take the score to 4-3.

The Bears brought on No. 1 starter Josh Lindblom in the ninth inning to close down the game. Lindblom made quick work of the first two batters, but things took a dramatic turn with mere moments left to play. With two outs and two strikes already on the board, Choi Jeong smashed a home run into the outfield to tie the game 4-4 on what could well have been the very last pitch of the night.

With victory snatched out their hands, the Bears struggled to get their momentum back at the bottom of the ninth. The game continued into extra innings, with both teams struggling to make an impact.

It wasn’t until the top of the 13th inning, more than five hours after the game began, that a home run from Han Dong-min gave the Wyverns the lead. The exhausted Bears were unable to respond, and at nearly 11:37 p.m. the Wyverns officially became the Korean Series champions for the fourth time in the club’s history. The Bears missed out on the championship, but still hold the pennant after winning the regular season.

Han was named Korean Series MVP after knocking in the winning home run. Though he only batted 4-for-21, two of the four hits were home runs and he knocked in four runs.

Han’s home runs bookended the series. His first blast was a two-run shot in the first inning of Game 1, which the Wyverns won 7-3. He went through a dry spell, but ended it with a bang by hitting the game-winning shot.

Han also played the hero in the previous playoff series against the Nexen Heroes. It was his walk-off solo homer in extra innings in Game 5 of that series that put the Wyverns in the Korean Series in the first place.

“I am pretty lucky to win this MVP award,” Han said in the post-championship ceremony while fighting back tears. “Everyone on the team, from coaches down to the players, worked so hard for this championship.”

Han also thanked the Wyverns’ relievers for putting up zeroes on the board and giving him a chance to hit the home run. And with manager Trey Hillman returning home to the United States after this season to be with his family, Han said he was glad to be sending him off with the title.

“We’ve been talking about winning one for our manager, and to actually do this is really gratifying,” Han said. “I was disappointed with my previous at-bat, and I wanted to win the game for the team. And as soon as I made contact, I knew it was going to leave the park.”

Han’s tribute to Hillman echoes comments from the other players on the team. During his two-year stint, the American manager transformed the Wyverns into the KBO champions, their days as an underachieving team already a distant memory.

Hillman won’t be around to take a crack at a second straight title. He announced last month, just before the end of the regular season, that he won’t be returning as the Wyverns manager next year. He will instead try to spend more time with his ailing parents back in the United States.

Hillman became the Wyverns manager in November 2016, taking on a team that had missed the postseason in three of the four previous seasons. In 2017, the Wyverns earned a spot in the wild card game by finishing fifth in the regular season, but lost to the NC Dinos to get sent home right away.

In 2018, the Wyverns stayed in the top three for the majority of the season and earned the second seed for the postseason.

Hillman made his announcement of impending departure before the postseason began so there wouldn’t be any distractions surrounding the club. And Hillman’s players responded with their gutsy postseason run, rallying around their outgoing manager and sending him off with a championship ring.

Hillman, former manager of the Kansas City Royals and with a Japanese league title with Hokkaido Nippon-Ham Fighters to his credit, said the Korean Series title “ranks right at the top” on the list of his career achievements.

“It’s incredible,” Hillman said in his post-championship press conference, soaked in champagne. “The people I’ve got around [me], the relationships we have, and the love that we have for each other ... it’s really special.”

Hillman will be replaced by someone the players know well. The club announced Tuesday that general manager Yeom Kyung-yup will come down from the front office to take the helm on the bench.

Yeom previously managed the Nexen Heroes from 2013 to 2016, taking the club to the postseason in all four seasons. He abruptly resigned from the Heroes job moments after being eliminated by the LG Twins in the first round of the playoffs in 2016. Then in January 2017, Yeom became the Wyverns’ general manager.

Yeom said he’s learned a great deal from Hillman, and the two years as the general manager afforded him a new perspective on the game.