Park Soo-keun’s 1961 painting “People in the Marketplace” is one of the pieces that will be on offer at K Auction’s sale on Nov. 21 in Seoul. Some expect that it could beat the artist’s record and become one of the 10 most expensive Korean paintings ever auctioned. [K AUCTION]

A painting by Park Soo-keun (1914-1965), one of Korea’s most beloved modern artists, will go under the hammer next week, raising expectations that it could beat the artist’s record and become one of the ten most expensive Korean paintings ever auctioned.

K Auction, a major local auction house, said last week it would put Park’s 1961 oil painting “People in the Marketplace” up for sale on Nov. 21 at its headquarters in southern Seoul.

The painting depicts women selling goods in a marketplace, which is one of Park’s favorite subjects. He focused on depicting the everyday life of ordinary Korean people, in particular women forced to work outside the home to support their families in the aftermath of the Korean War (1950-53).

The painting is also in Park’s signature style - the colors remind viewers of soil and stones and the unique texture has the feel of granite, the main material used for traditional Korean stone art.

That texture is one reason why he did not leave many works behind. To create texture, he used both brushes and knives and applied heavy layers of oil paint again and again on each painting, a time intensive endeavor.

“Our ancient stone works such as the pagodas and statues of Buddha are a source of exquisite beauty that cannot be described in words. I am inspired by this beauty,” Park once said.

Because of the scarcity of Park’s paintings and because of the warm atmosphere of humanity the paintings carry even though they depict ordinary people living in the hardest times of Korea’s modern history, Park has been one of the most sought-after artists in the Korean art market.

According to K Auction, the estimated price of “People in the Marketplace” is between 4 billion won ($3.5 million) and 5.5 billion won. 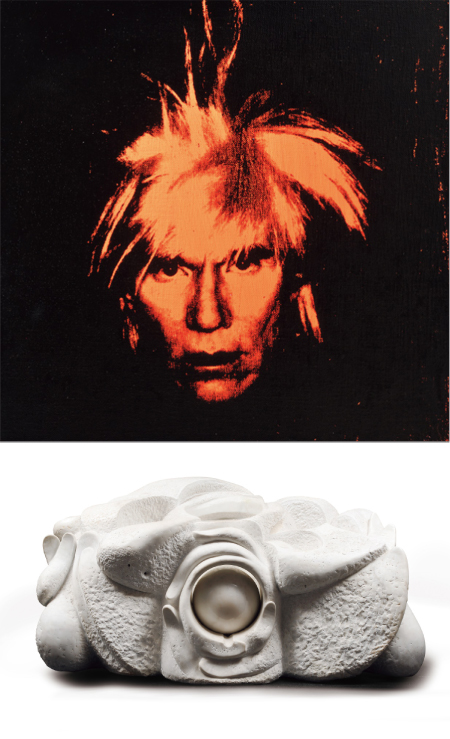 Andy Warhol’s work “Self Portrait” (1986), left, and Louise Bourgeois’s marble sculpture “Cleavage” (1991) are some of the pieces that will be on offer at Seoul Auction’s Hong Kong sale on Nov. 25. [SEOUL AUCTION]

“The painting was owned by a foreign collector, who admired Park, for about 40 years, before it was recently sold to a Korean collector,” the auction house said in a press release.

The highest price ever paid for a work by Park was 4.52 billion won for “Washing Place,” which was auctioned in 2007. It was the highest-ever price for Korean modern art at the time and is now ranked ninth.

The painting “Washing Place” was at the center of a forgery controversy and after two years of legal battles, the Seoul Central District Court ruled in 2009 that the work was authentic, based on reviews by the Korean Art Appraisal Board.

The large abstract paintings filled with dots created by Kim during his New York period (1963-74), including “03-II-72 #220,” are regarded by art historians as the peak of the artist’s oeuvre.

K Auction will also offer Kim’s paintings including a New-York-era dot painting “22-X-73 #325” (1973), estimated at 3 billion to 5 billion won, and earlier paintings, at the upcoming sale.

The auction house said it will put a total of 203 pieces of art worth 21.1 billion won (based on the lower limits of the works’ estimate prices) up for the sale.

“As we found the biggest buyer of Western art is now Asian collectors, we decided to focus on Western art masters for this Hong Kong sale,” said Lee Ok-kyung, CEO and vice chairwoman of Seoul Auction.

A total of 54 pieces valued at $24.2 million will be offered in the auction at the Grand Hyatt Hong Kong.

Among the highlights are Warhol’s work “Self Portrait” (1986), estimated to fetch between $2 million to $3.2 million, and Bourgeois’s marble sculpture “Cleavage” (1991), which has the same estimate price.