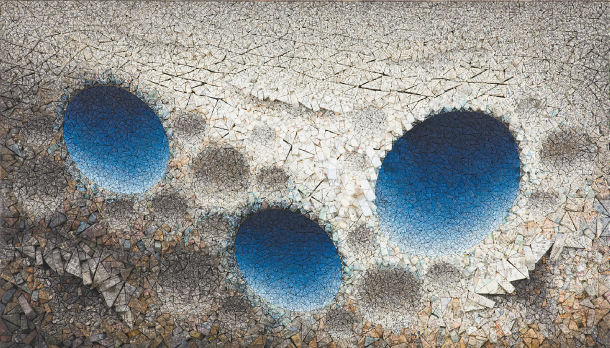 “Aggregation09-D071Blue,” a sculptural composition of hanji-wrapped parcels by Korean artist Chun Kwang Young is part of his solo show that starts on Friday at Brooklyn Museum in the New York City borough of Brooklyn. [PKM GALLERY]

Korean artist Chun Kwang Young, 74, will present six large-scale pieces from his well-known “Aggregation” series - sculptural compositions made up of triangular pieces wrapped in paper - in his new solo exhibition at the Brooklyn Museum in New York. The exhibition opens Friday.

Curated by Joan Cummins, the senior curator of Asian art at the Brooklyn Museum, the solo show, entitled “Kwang Young Chun: Aggregations,” will feature five wall pieces and one that is freestanding, the museum said on its website. In the “Aggregation” series, numerous triangular pieces wrapped in hanji, or traditional Korean mulberry paper, torn from old Korean books, are put together to form the ruggedness and cracks typically found on the surface of the earth.

“The Aggregations are simultaneously Space Age and nostalgic, beautiful and violent, powerful and fragile,” the museum wrote on its website. “They draw on the artist’s training in abstract painting as well as memories of his childhood, when Korean apothecaries sold medicine in similar little bundles.”

Although these memories bring about warmth and nostalgia, each complete work in the “Aggregation” series gives a rather harsh feeling, with each element’s angular planes protruding in different directions and with visible gaps throughout a single piece.

When asked about this, the artist said, “This is because the works are scarred human inner landscapes.”

But the artist began to apply bright, rich colors to his “Aggregation” series in recent years, adding emotion and lyricism to his harsh “inner earth landscapes.”

He said the colors were obtained through traditional Korean natural dyeing techniques.

At the Brooklyn Museum, Chun’s works will be presented adjacent to Korean objects related to writing, reading, and paper that are part of the museum’s Arts of Korea galleries, according to the museum.

“I’m happy to present my works at one of the oldest art museums in New York,” Chun told the Korea JoongAng Daily in Seoul before departing for New York to participate in the opening.

The exhibition will run through July 28 and will also stop at the Jordan Schnitzer Museum of Art located on the University of Oregon’s campus.

Meanwhile, another Korean artist, Do Ho Suh, is holding a solo show at the Brooklyn Museum through Jan. 25. Suh’s exhibit features his famous life-size sculpture made of translucent fabric constructed to look like his previous house, “The Perfect Home II”(2003).