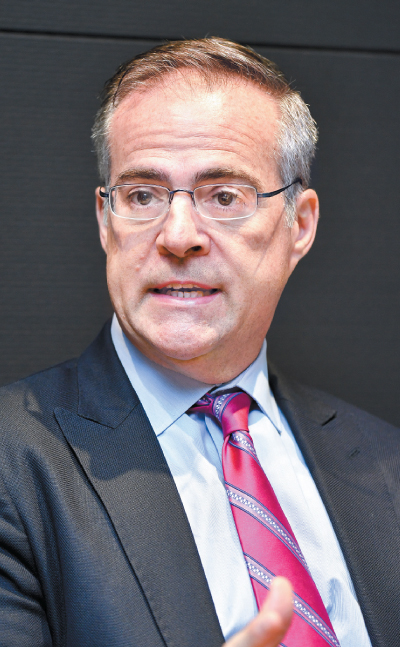 The U.S. midterm elections earlier this month were of great interest to the Korean government and companies, largely because of the impact that a Democratic takeover of Congress could have on the ongoing trade war between the United States and China.

As a country that relies on the two superpowers for one-third of its trade, Korea is directly impacted by the prolonged trade conflict.

Daniel Ikenson, trade policy director at Cato Institute, a liberal U.S. think tank, says Korea should consider joining the Comprehensive and Progressive Agreement for Trans-Pacific Partnership (CPTPP), led by 11 countries including Japan, as a means of divesting from China and the United States. Ikenson said the ongoing dispute is unlikely to be resolved in the near future, even though the Democrats have taken over the U.S. House of Representatives.

Ikenson is an expert in U.S.-China relations and has authored dozens of papers on various trade policies with a special focus on U.S.-China issues since he joined the institute in 2000.

“I think a lot of people were hoping that a Democratic takeover of the House would serve to rein in Trump’s protectionist trade policies,” Ikenson said as he sat down for an interview with the Korea JoongAng Daily on the sidelines of an international forum hosted by the Korea International Trade Association in Seoul on Monday. “I don’t think it will.”

According to Ikenson, both Republicans and Democrats recognize that China has not been playing by fair trade rules and are willing to come up with strong measures to make it change its practices, though they don’t necessarily agree that imposing heavy tariffs is the way to go.

The trade policy expert said he hopes the two parties will persuade Trump to rejoin the Trans-Pacific Partnership (TPP), now the CPTPP. Trump decided to pull the United States out of the partnership last year. The TPP was championed by former U.S. President Barack Obama and was intended to rewrite the rules for global trade and effectively keep a check on China.

“TPP to me wasn’t perfect, but it was the best game in town,” the trade policy director said.

According to Ikenson, the original 12 members of the TPP, including the United States and Japan, accounted for about 40 percent of the global GDP. Trade between the members, which includes some of China’s regional partners, would likely have encouraged China to join the group as well.

“That would be a way to encourage China to play better on intellectual property, forced technology transfers and on subsidies, because there were rules that were developing within the TPP,” he said.

Ikenson encouraged Korea to join the CPTPP to save itself from the dilemma of siding with either superpower.

“Even though Korea has bilateral agreements with every country except Japan, there is a strength in numbers in this group of countries [that can] counterweight larger economies like the U.S. and China,” Ikenson said. “Achieving some commonality of perspectives within the group could help insulate Korea from the fallout.”

The trade policy expert assessed that the New Southern Policy initiative of the Moon Jae-in administration was a “good strategy.” The policy aims at expanding economic partnerships with Southeast Asian countries as well as countries in South Asia, including India, and reducing dependence on the United States and China.

According to the Cato director, the Trump administration is trying to encourage its allies to divest from China by keeping tariffs in place so that companies won’t want to keep China as their final point of assembly.

“The Trump administration has inserted into the new free trade agreement (FTA) between [Canada, Mexico and the United States] a provision that the agreement can be terminated if the other parties have an FTA with a non-market economy,” he said. “So there might be some pressure on Korea at some point.”

As for other impacts of the U.S. midterm elections on Korea, Ikenson said the recent negotiations on the Korea-U.S. free trade agreement (Korus) could be slowed by the Democrats if they want to deprive Trump of something he can point to as a political victory.

“If the Democrats are interested to see something in the Korus, they might hold out and insist on it,” Ikenson said. “I think the administration would say we don’t need Congressional approval because this is just a modification to the original Korus, but the fact is they can argue.”

Ikenson cited the 25 percent tariff that the United States holds on pick-up truck imports, which has been extended for another 20 years under the revised Korus.

“To me, that requires Congress to sign off because it’s a tariff [and] there might be other provisions, depending on what happens here in Korea, during the ratification process,” he said.