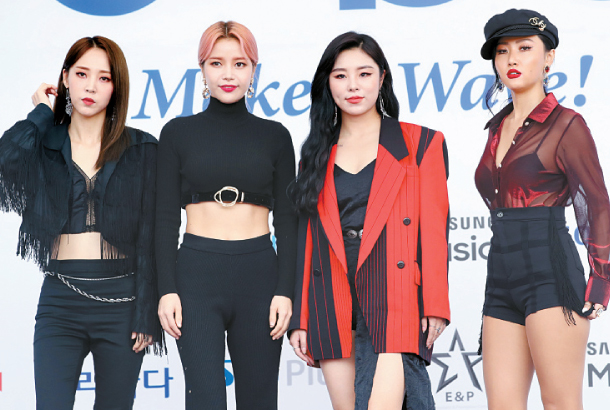 Girl group Mamamoo’s agency issued an apology on Monday for rejecting fans’ demands that they relax the group’s hectic schedule.

“We apologize for not paying attention to the fans’ opinions and for causing trouble,” RBW Entertainment wrote on the group’s official fan page. “[From now on,] we will be more considerate of fans’ opinions and take them into consideration in the future activities of the band.”

However, their agency once again confirmed that the upcoming December concert “Mamamoo F/W Concert” will proceed as usual, since much of the planning has already taken place and the venue was reserved in August.

Complaints were first raised by the group’s fan association on Nov. 9, when it issued a statement asking the agency to postpone the group’s F/W concerts next month. The fans were worried about Mamamoo’s packed schedule and health conditions. According to the association, this year the group has already released two EPs, held seven concerts in Korea and more than 70 regional activities, debuted in Japan and held additional concerts overseas.

The agency, however, responded the next day that the concerts cannot be postponed and the members had already rested enough, so they will be able to perform in good conditions.

To this, the association immediately issued another statement saying that it would boycott the group’s upcoming concerts and goods unless the agency provides them with a “reasonable response.”