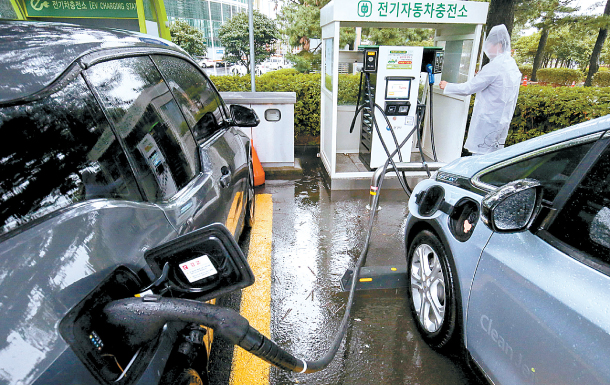 A driver charges his car during Typhoon Kong-rey at a charging station at the International Convention Center in Jeju on Oct. 6. Most charging stations in the country have open-air charging ports exposed to severe weather conditions. [CHANG CHUNG-PIL]

The government’s recent drive to promote the electric vehicle (EV) industry has met an unexpected concern from drivers - a fear of getting shocked.

Although the EV push has led to the installation of over 7,000 charging stations, drivers are now complaining the infrastructure is unable to shield them from the weather when it rains and snows.

Drivers worry that using charging ports that are wet could damage their vehicles or, even worse, give them an electric shock.

The issue is most prominent in the southern resort island of Jeju, home to nearly 30 percent of the 46,000 EVs in the country.

On Oct. 6, when Jeju was hit by Typhoon Kong-rey, EV drivers were uncertain if it was safe to charge their vehicles. Lee Eun-jeong, who arrived at a charging station at the International Convention Center in Jeju, spent about 30 minutes deciding whether or not to charge her rented Chevrolet Bolt for fear that she could get shocked.

The tourist from Seoul only plucked up the courage to plug the vehicle in after she wrapped her hands with a black plastic bag.

“I heard that you can’t get shocked by EVs, but I was afraid to try charging it during a storm for the first time,” said Lee.

A roof to protect charging stations from the weather would reassure drivers like Lee, but currently, more than 98 percent of electric charging ports installed at tourist attractions and government buildings in Jeju are open-air.

Meanwhile, manufacturers and the government say that fears of getting shocked by an EV or a charger are unwarranted.

The risk of being shocked by charging an EV is low as vehicles are grounded and there are safety measures implemented to prevent such accidents.

“The battery and the charging section of EVs are designed to be dust and waterproof, so the power is automatically cut off in emergency situations such as flooding,” explained Park Min-hyung, an official at Hyundai Motor.

Despite such explanations, recent charging station accidents have stoked fear among EV drivers.

Last August, a charging port in a parking lot at a Jeju government building exploded. The explosion is believed to have been caused by rain water and other sediment seeping into the unit.

A suspected electric shock was also reported at a station in Chungju, North Chungcheong, in April, and another charging station accident occurred in Daegu in July.

There are also practical reasons to improve the infrastructure of charging stations.

The LCD displays on charging ports are difficult to read during the daytime due to the strong sunlight, causing further frustration.

As of late-September, there were only 961 charging stations in Seoul, compared to the 8,105 registered EVs in the capital city. The problem is severe in EV haven Jeju, where only 725 stations supply power to 13,636 registered EVs.

“I rented an EV because the number of charging stations in Jeju increased, but the infrastructure for bad weather and for visitors is still inadequate,” said Kim Chang-ho, a 51-year-old from Busan.