Phone makers pile on the cameras

Phone makers pile on the cameras 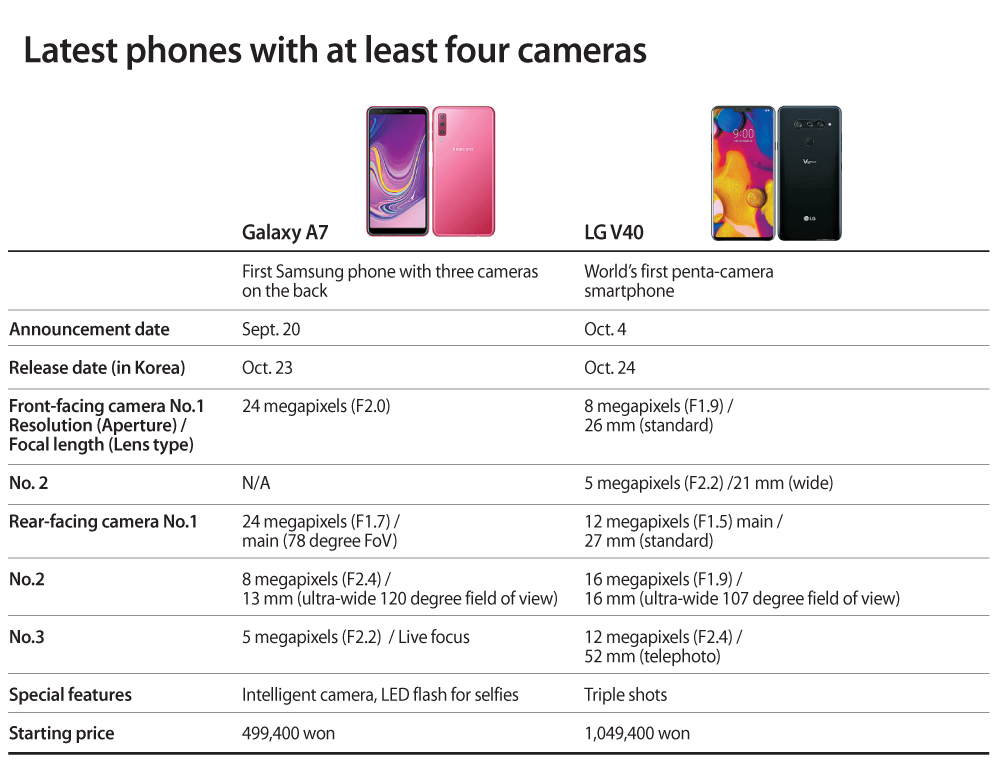 The more the merrier. At least that seems to be the thinking when it comes to the number of cameras on a smartphone.

LG Electronics brought a far-from-familiar word into fashion with the release on Oct. 24 of the V40 ThinQ smartphone: penta. The word is an ancient Greek prefix meaning five, which the company used to emphasize the number of cameras embedded within the latest flagship smartphone.

The V40 is the country’s first smartphone with five cameras, which LG explains helps users take better photos faster. The device has dual front-facing cameras and three facing back. Three cameras positioned side by side are commonly referred to as a “triple camera.”

Triple cameras are quickly replacing dual cameras as the new normal for smartphones this year. As smartphone sales have been slowing in the face of market saturation, it is a challenge for manufacturers to come up with anything new to attract customers.

The exception is likely to be the foldable display being introduced by Samsung and Huawei in 2019.

The trend has led vendors to increase the number of cameras on their devices and improve the functionality of the cameras.

“The supply of smartphones with triple cameras began this year, and the camera feature is set to become a distinctive feature for major flagship models next year,” said Kim Ji-san, an analyst at Kiwoom Investment and Securities. “Triple cameras have issues to resolve, such as the increase in device costs and electricity consumption as well as software development, but they will widen the functionality gap with smartphones that do not have them - just as smartphones with dual cameras did until recently.” 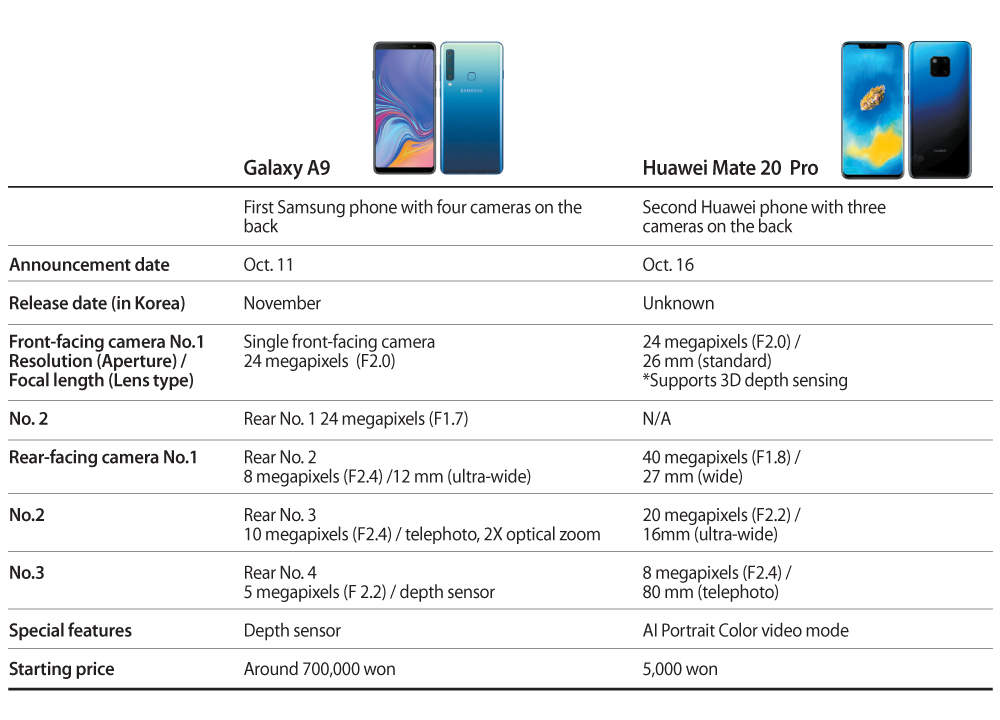 A recent consumer survey shows why smartphone producers are betting on cameras. An LG survey of 1,000 consumers aged between 20 and 44 in Korea and the United States showed 87 percent of them use phone cameras at least once a week. Of those surveyed, 81.6 percent said they used their phones once a week for calls and 80.3 percent for social media.

The dual camera system over the past two years has become the default for premium phones. It is a feature of the Samsung Galaxy S and Note models as well as on iPhones.

The proportion of smartphones with dual cameras is expected to grow to 30 percent in 2018, from 16 percent in 2017. That number is projected to hit 50 in 2019, according to Digitimes Research last year.

In September, Samsung Electronics fit its Galaxy A7 mid-range non-flagship smartphone with three cameras on the back. Then the company went one step further, introducing a phone, the Galaxy A9, with four cameras on the back and a single front-facing camera on Oct. 11. The setup was unprecedented. Five days after Samsung took the wraps off the A9, Huawei released a triple-camera smartphone, the Mate 20 Pro.

When it comes to triple cameras, Samsung and LG were not the first in the world. Huawei offered the first smartphone with three cameras - the Huawei P20 Pro. The device was introduced in partnership with Leica in March. The second-largest smartphone producer in the world said the phone “pushes the boundaries of creative mobile photography.” Its 3-D scanning mode lets users animate objects and place them in augmented videos real time.

Huawei followed up with the Mate 20 series, also embedded with three rear-facing cameras, on Oct. 16. Neither the P20 Pro nor the Mate 20 has yet to be released in Korea. A Huawei Korea spokesman said the headquarters is reviewing the plan, adding there is a slim chance Korea will see either of the phones by the end of the year.

Why so many cameras?

Many wonder how the multiple cameras work. Do they operate together or independently? The answer is both. With LG’s V40, users see three photo types on the right side of the screen when they launch a camera app - regular, ultra-wide angle and telephoto.

They are supported by the three lenses on the back, which have differing resolutions, angles and purposes.

Alongside the three options, four additional tabs appear at the bottom of the screen for users to choose from: the Q lens powered by Google Lens, out-of-focus, triple shot and an artificial intelligence (AI) camera.

The triple-shot option mobilizes all of the cameras. Choose the tab and take a single photo. The three cameras take a photo from their own perspectives, and users may combine the three different shots with different angle options to create a short video.

The AI camera automatically switches to the optimal setup. For example, when the camera faces the sky, a sky mode is turned on.

LG says packing the three cameras onto the back is “to deliver a standout smartphone for today’s content-creating social generation.”

“LG designed the LG V40 ThinQ from the ground up to deliver a truly all-encompassing smartphone camera experience,” the company added.

When it comes to Samsung’s A9, set for release mid-November - in some countries in Asia and Europe first - the four cameras boast four different resolutions - 24, 10, eight and five megapixels.

The first one is regular, the second is telephoto and the third is for ultra-wide angle shots. The fourth, with the lowest resolution, serves as a depth camera that gives users the ability to manually adjust the depth of field of their images. That will help create so-called “bokeh-effect” photos, whereby the subject is in focus but the background is blurred

Super-wide and telephoto cameras can already supply depth information in general. The Galaxy Note8, Galaxy S9 and the Galaxy Note9 are all able to create Live Focus images with the aid of a telephoto camera. But the five-megapixel depth camera on the A9 can be utilized to obtain even more detailed depth maps, experts say.

The camera quantity battle is set to continue for a while. A company called Light is said to be building a multiple-camera smartphone. According to the Washington Post in July, it is developing a smartphone with up to nine cameras that will be able to take a 64-megapixel shot. A recent leak has shown that Nokia is working on a smartphone with five cameras at the rear, alongside a flash and an unidentified black sensor.

The Galaxy S10, set to be unveiled in February, is highly likely to be equipped with triple rear cameras with one equipped with a 3-D sensor, and Apple, now the world’s third-largest smartphone maker, is also said to be gearing up for a triple-camera iPhone in the latter half of next year, according to speculation. The multiple-camera trend is expected to gather momentum when next-generation 5G connectivity is deployed early next year.

“In the age of 5G, it will become much easier to process real-time massive image data collected by cameras,” said Kum Ga-ram, an analyst at Hana Securities and Investment, “which means cameras can handle so much more in the future. Cameras will grow into a key component for data collection.”