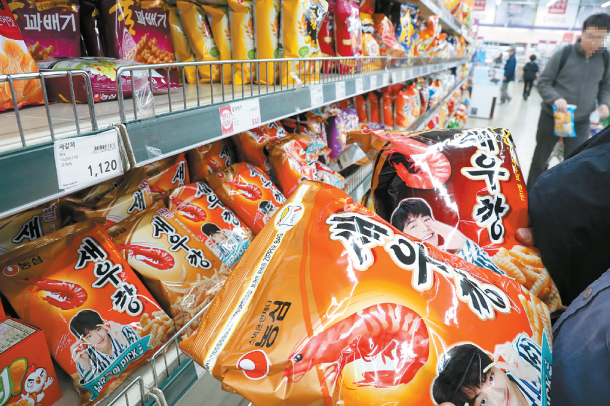 A customer purchases a bag of Nongshim Shrimp Crackers on Tuesday, two days before the company is set to raise the prices of 19 of its snack brands. [YONHAP]

“We have decided to raise prices in the face of accumulated pressure from rising production, labor and management costs,” said a Nongshim spokesperson. “We have tried to minimize the scope of the price rise in consideration of our consumers.”

According to the company, Nongshim will raise the prices of 19 out of its 23 snacks by an average of 6.7 percent beginning from Nov. 15.

A 90-gram (3.17 ounces) bag of Shrimp Crackers, one of the company’s iconic products, will now cost around 100 won ($0.08) more than the current 1,200 won. The prices of other favorites, such as Onion Rings, Honey Twist Snacks and Tako Chips, will rise by 6.1 percent, while the price of Pretzels will jump by 7.4 percent.

Tomorrow’s hike will mark the first time in over two years that Nongshim has increased snack prices. It upped the price of 15 of its snacks by an average of 7.9 percent in July 2016. In Feb. 2014, it increased the price of Shrimp Crackers by 10 percent.

Earlier this year, competitors Crown-Haitai Confectionery and Lotte Confectionery began charging more for some of their snacks, both citing rising production costs.