The Lion King Review: Jaw-dropping show is worth the trip

The Lion King Review: Jaw-dropping show is worth the trip 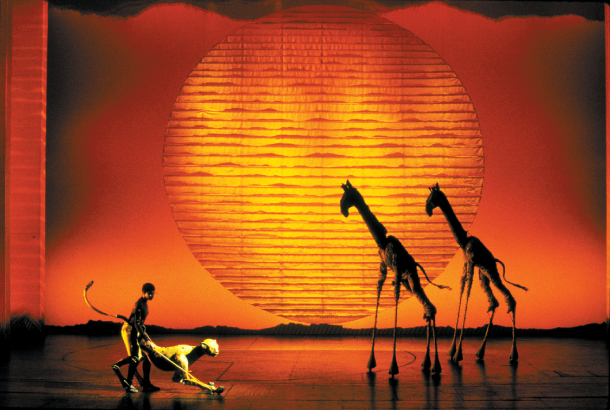 The opening scene of “The Lion King” musical, which is currently running at Daegu’s Keimyung Art Center before heading to Seoul on Jan. 9. [DISNEY]

The only voice Simba can hear is his own, echoing through the desert. This scene from the Disney animated film “The Lion King,” where young Simba cries out for help after realizing his father Mufasa has died in what he thinks was an accident caused by him, made me, then a sensitive 10-year-old girl, cry in 1994.

Ever since, the film has been one of my favorite movies of all time, and I’ve watched it about a thousand times. So when it was announced that the musical version of my favorite Disney flick would be roaring into Korea, I couldn’t help but get my hopes up.

The show opened its two-month run at the Daegu’s Keimyung Art Center on Nov. 9, and was worth the two-and-a-half-hour KTX train ride to Daegu from central Seoul. The first scene where all animals come together on stage and sing “The Circle of Life” instantly brought back childhood memories, but with fuller music topped with spectacles of detailed and sophisticated costumes and stage designs that made my jaw drop every time a new animal appeared.

The show celebrated its 20th anniversary on Broadway last year. The New York Times critic gave it five stars, saying “There is simply nothing else like it.”

Indeed, there’s simply no other way to describe this piece of art. If the timeless story of “The Lion King” touched a 10-year-old girl’s heart some 20 years ago, it was the genius of the show’s director Julie Taymor that mesmerized a thirty-something-year-old theater aficionado today. Taymor calls it the “double event,” which enables the audience to see the characters as animals and human at the same time. This concept, topped with the simple charm of shadow puppetry ought to shine brighter as we go further into the digitalized world.

The power of the music in “The Lion King” is not questionable. Legendary lyricist Tim Rice joined forces with iconic artist and composer Elton John to write songs for the original film. Who could argue with the great musical numbers from names like Lebo M., Hans Zimmer and Jay Rifkin? But what attracted me this time was the passionate conducting of maestro Mike Schaperclaus in the orchestra pit and the traditional African instruments like the jembe played by two African musicians on each end of the stage. These are things that can only be appreciated in the theater.

What makes this international tour more unique is that its cast hails from 18 different countries - the most diverse cast of “The Lion King” ever, according to its producers. For the premiere, Ian Albert Magallona from the Philippines played the young Simba, while African-American Dashaun Young played an older Simba.

The two pull off the protagonist perfectly while Antony Lawrence, with his brilliant British accent, wickedly played uncle Scar. Josslynn Hlenti from South Africa showed how a strong and independent warrior princess can be portrayed while playing Nala, while Mthokozisi Emkay Khanyile, also from South Africa, played Mufasa confidently, but was tender with his young Simba. The three hyenas were hilariously played by Candida Mosoma, Bjorn Blignaut and Mark Tatham, not to mention the two lovable characters Timon and Pumba played by Jamie McGregor and Pierre van Heerden. These five characters really seemed like the characters from the film brought to life, but Zazu, played by Andre Jewson from Australia was arguably the most similar.

Overall, the show is something that you can’t see just once and, oh, I just can’t wait to see it again.