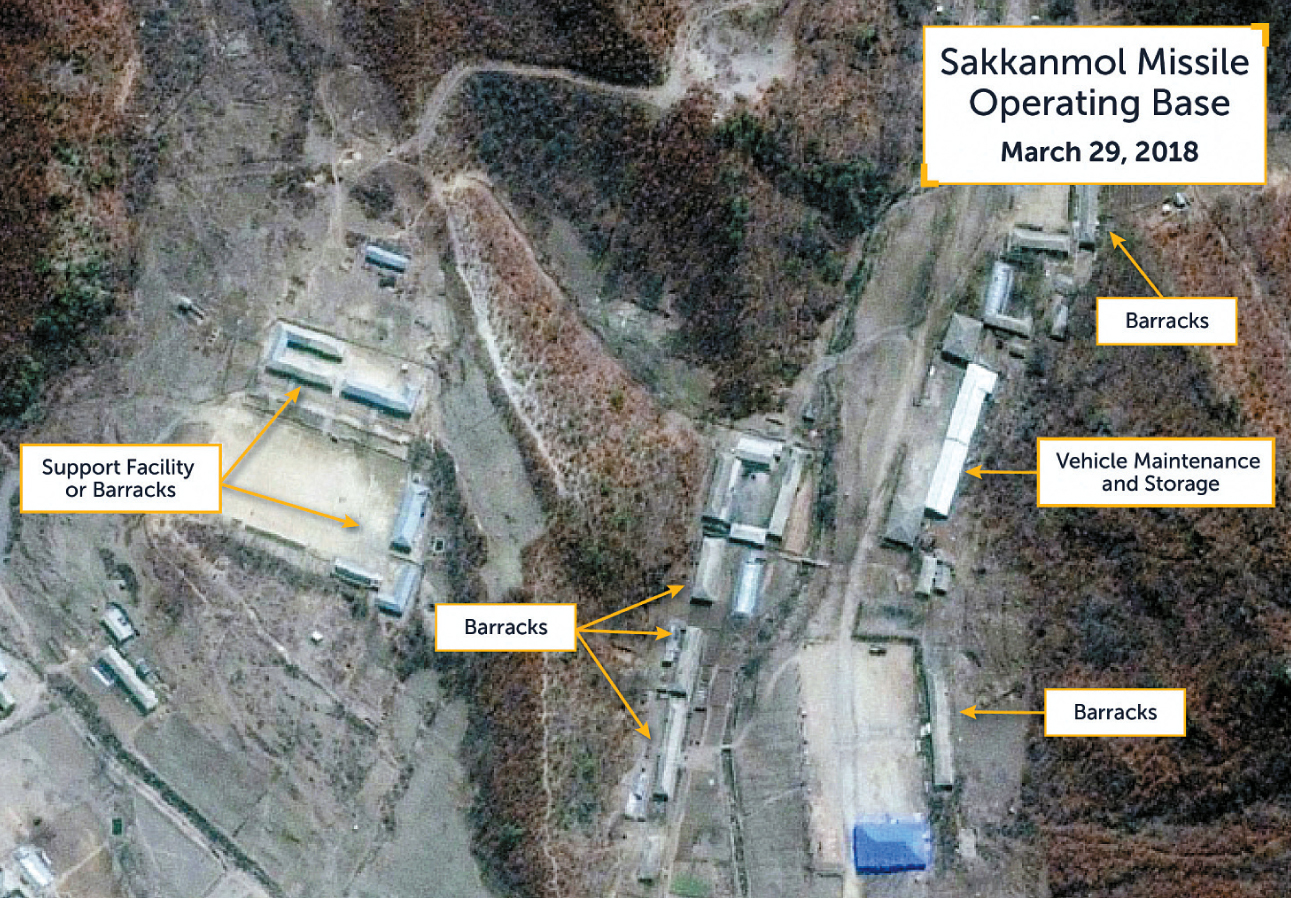 A DigitalGlobe satellite image taken on March 29 shows what the Washington-based Center for Strategic and International Studies(CSIS)’ Beyond Parallel project reports as an undeclared missile base in Sakkanmol, North Korea. [REUTERS/YONHAP]

A U.S. think tank said Monday it has identified at least 13 of an estimated 20 undeclared missile bases inside North Korea, a claim that could undermine denuclearization negotiations between Pyongyang and Washington.

Seoul’s Blue House downplayed the findings as old information and rejected the notion that Pyongyang has engaged in deceptive practices, saying that North Korea has never pledged to scrap its ballistic missile program.

Beyond Parallel, a group specializing in Korean unification issues at the Washington-based think tank Center for Strategic and International Studies (CSIS), released a report Monday that described these missile operating bases, undisclosed by the North Korean government, as being capable of launching short-range ballistic missiles (SRBM) to intercontinental ballistic missiles (ICBM).

Such sites, it continued, “would presumably have to be subject to declaration, verification, and dismantlement in any final and fully verifiable denuclearization deal.”

The report described the missile bases as being rudimentary in terms of facilities and dispersed throughout the country, mostly located in narrow mountain valleys. Their dispersed deployment and distinctive features, according to the report, “are combined with decades of extensive camouflage, concealment and deception practices to maximize the survival of its missile units from pre-emptive strikes and during wartime operations.”

Sakkanmol, located in the Tactical Belt in North Hwanghae Province, is one such undeclared operational missile base for SRBMs, but it is also able to accommodate medium-range ballistic missiles, according to a follow-up report by Beyond Parallel. It is located just 85 kilometers (52 miles) north of the demilitarized zone (DMZ) and 135 kilometers from Seoul.

The report describes three ballistic missile belt layers based on their deployment pattern and distance from the DMZ. The Tactical Belt is located closest to the inter-Korean border and equipped with shorter-range capabilities, followed by the Operational Belt in the center of the country and the Strategic Belt at the northern end.

The Operation Belt, located 90 to 150 kilometers north of the DMZ, is reportedly equipped with Rodong and other mid-range missiles that cover all of South Korea and Japan, while the Strategic Belt, the furthest from the DMZ, is likely home to the North’s ICBMs.

The Sakkanmol site, also known as Togol, is a forward Hwasong-5 and Hwasong-6 missile operating base under the Strategic Force of the North Korean People’s Army, responsible for all ballistic missile units, the report added. Its construction dates back to the early 1990s, and the report added that based on satellite imagery, as of November, “the base is active and being reasonably well-maintained by North Korean standards.”

North Korea’s decommissioning of the Sohae satellite launch facility, also known as the Tongchang-ri site, in Cholsan County, North Pyongan Province, according to the report, “obscures the military threat to U.S. forces and South Korea from this and other undeclared ballistic missile bases.”

In the inter-Korean Pyongyang Declaration signed on Sept. 19, North Korea agreed to “permanently dismantle” the Tongchang-ri missile engine test site and launch platform “under the observation of experts from relevant countries.” The North further said it is willing to “take additional measures,” including the permanent dismantlement of nuclear facilities in its key Yongbyon complex, if the United States takes “corresponding measures” in the spirit of the June 12 North-U.S. joint statement signed by North Korean leader Kim Jong-un and U.S. President Donald Trump in Singapore.

Beyond Parallel is headed by Victor Cha, Korea chair at the CSIS and a former White House National Security Council official, who is one of the co-authors of the reports, along with North Korea analysts Joseph Bermudez and Lisa Collins. The report cited open-source information and commercial satellite imagery, as well as interviews with North Korean defectors and government, defense and intelligence officials.

The New York Times on Monday published an article suggesting that North Korea “has been engaged in a great deception,” offering to dismantle its major missile launching site while continuing to make improvements at more than a dozen others “that would bolster launches of conventional and nuclear warheads.”

NBC News reported Tuesday, citing U.S. officials briefed on recent intelligence, that North Korea has continued its ballistic missile program at a number of its military bases. However, one official was quoted as saying, “It’s significant that they have not tested one in nearly a year” and that diplomats need to be given the “time and space to work.”

While the revelation of these undisclosed facilities could be a possible setback to the denuclearization negotiations between the United States and North Korea, the Blue House underscored that the U.S. and South Korean intelligence authorities already have information on the facilities, and in much greater detail.

“The CSIS report sites commercial satellite imagery, whereas the South Korean and U.S. authorities already have far more detailed information from military satellites and are closely monitoring it,” said Kim Eui-kyeom, the Blue House spokesman, Tuesday in a briefing in Seoul. “There is nothing new there.”

He added that the Sakkanmol site is for shorter-range missiles, such as the Scud and Rodong, and “unrelated to ICBMs and intermediate-range ballistic missiles.”

Kim rejected the idea that North Korea not disclosing these missile sites can be considered deceptive, as being reported by some U.S. media outlets.

North Korea also is not obligated to declare such missile bases, according to Kim, since “such an agreement or treaty does not currently exist.”

Kim continued, “The existence of such a missile site in itself shows the need for talks with North Korea at an early date,” which could include discussions on disclosures of the North’s nuclear stockpile and related facilities. “This further shows the need for North Korea and the United States to negotiate and engage in dialogue in order to alleviate North Korea’s threat,” he continued.

In the June 12 North-U.S. joint statement, Kim Jong-un committed to the “complete denuclearization of the Korean Peninsula.” The text does not make direct mention of the North’s ballistic missiles program. Trump said during a press conference the same day that leader Kim committed to destroy a major missile engine testing site, something not in their joint statement.

However, the U.S. State Department said through a spokesperson’s statement Monday, “President Trump has made clear that should Chairman Kim follow through on his commitments, including complete denuclearization and the elimination of ballistic missile programs, a much brighter future lies ahead for North Korea and its people.”

The State Department remark explicitly mentioned the elimination of the North’s ballistic missile program, unlike the Blue House spokesman, who separated the issue of the missile program from the nuclear program.