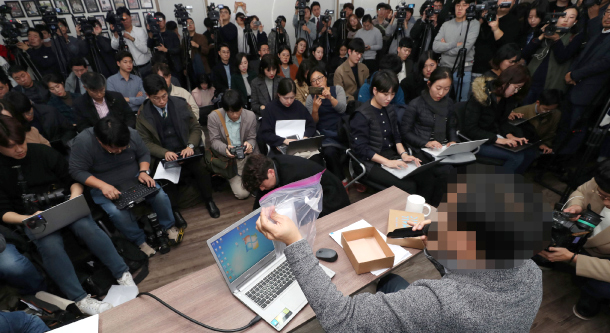 A whistle-blower who revealed alleged abuses by Yang Jin-ho, the chairman of Korea Future Technology, holds up an envelope filled with cash in front of reporters at a press conference in central Seoul, on Tuesday. He said Yang gave him the money to obtain his silence in a police investigation of the alleged abuses. [NEWS1]

A whistle-blower who revealed rampant abuses by the owner of two of Korea’s largest online file sharing systems said, on Tuesday, that the businessman tried to shut witnesses up with cash from his massive illegal pornography ring.

At a press conference, the whistle-blower introduced himself as a senior manager at one of the companies owned by Yang Jin-ho, the chairman of Korea Future Technology and suspect in massive abuse scandal. The employee told reporters that he decided to reveal the full extent of Yang’s alleged crimes and dispel rumors about his own participation in the scandal.

The whistle-blower held up a thick envelope filled with cash to reporters, which he said Yang gave to him and other workers to silence them after the allegations first emerged. He also said Yang ordered employees to get rid of evidence by deleting content on their computers when police launched their investigation into him earlier this month.

By the time this company was sold, its worth had grown almost eightfold from its initial value, and much of the profits went untaxed into Yang’s slush fund. The whistle-blower alleged that Yang’s slush fund may have contained at least 4 to 5 billion won, which funded his lavish lifestyle.

Yang was arrested by police last week on a series of charges including assault, coercion and violation of laws on private information and sexual abuse. Police also charged him with consuming illegal drugs like marijuana, which witnesses said he forced his employees to smoke.