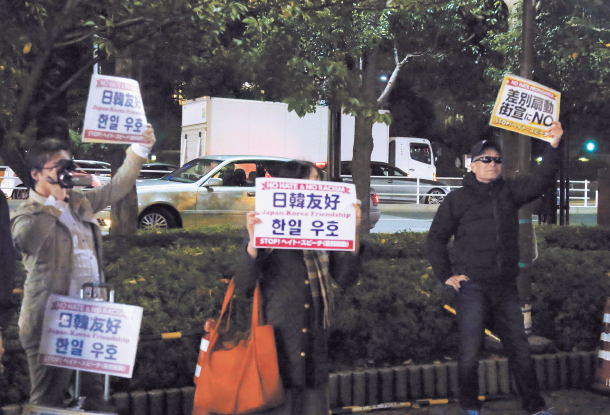 People hold up signs denouncing hate speech at a counter protest of far-right demonstrators who stood near the BTS concert at the Tokyo Dome on Tuesday evening. [YONHAP]

“We don’t condone any activities of war or the use of atomic weapons. ... We had no intention of hurting victims of the dropping of atomic bombs,” it said Tuesday night, referring to the controversy over a T-shirt worn by BTS member Jimin that had an image of an atomic bomb exploding.

It was the company’s first public statement on the issue since Japanese music programs took issue with the clothing choice and called off appearances by the group.

“We sincerely apologize for failing to take the precautions that could have prevented our artist from wearing it and unintentionally inflicting pain on victims of atomic weapons and those who feel uncomfortable to see the association of our artists with imagery related to atomic bombings,” the statement read.

Despite the controversies surrounding the group’s garments, the group kicked off its world tour in Japan Tuesday afternoon at the Tokyo Dome. Fifty-thousand fans gathered to watch the concert, but the group was not free from protest.

Outside the dome, two people from a far-right Japanese community were protesting, saying that the members are not forgiven and that they are not welcomed in Japan.

Jimin also indirectly addressed the issue during the concert.

“My heart really aches. ... Not only ARMY but also many people around the world must have been surprised and concerned over recent controversies,” he said.

“I will never forget our first Tokyo Dome concert. I am so happy to be here with you. I hope you feel the same,” he said.

The company also issued an apology for the hat worn by RM with alleged Nazi iconography during a photo shoot four years ago, after the Simon Wiesenthal Center, a Jewish human rights organization, criticized it for “mocking the past.”

“We would like to offer our sincere apologies for inadvertently inflicting pain and distress on anyone affected by totalitarian regimes in the past by failing to strictly review the clothing and accessories that our members were made to wear, as well as to anyone who may have experienced distress and discomfort by witnessing an association of our artists with imagery reminiscent of political extremism,” the company said.

It emphasized, however, that the company, not individual artists, should be blamed for their wardrobe choices, claiming “extensive schedules and the complexities of on-site conditions” made it hard for artists to carefully review their attire before wearing it.

The company said it contacted associations representing those affected by the atomic bombings for further explanation and sent a letter to the Simon Wiesenthal Center to apologize.

Meanwhile, the group held the No. 1 spot on Billboard’s Social 50 chart for a landmark 100th week, becoming the first group to achieve the mark since the chart started in December 2010, according to data for the week ending Nov. 17.

It has held onto the title for 70 consecutive weeks, since last July.