SMEs need to get serious about business abroad

SMEs need to get serious about business abroad 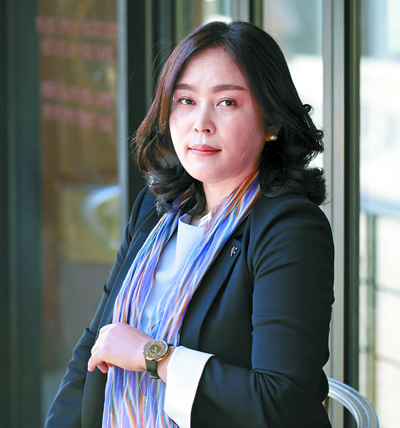 Kim Eun-ju, 47, is the CEO of EMC Global, a consulting firm that works with small and midsized enterprises (SMEs) that are trying to venture abroad. As a female graduate of a little-known local college, Kim faced a steep uphill battle to found her own company in a society where business management is still overwhelmingly in the hands of male graduates of Korea’s top universities.

Despite the obstacles she faced, Kim was able to run her own company and she found fame last year after publishing a book that roughly translates to “How high-heels wearing Ms. Kim went from small parts supplier to CEO with 17 job titles.”

Q. What is export consulting?


A. It is type of service that supports, manages and encourages a company’s export activity. In Korea, such consulting services were considered part of a broker’s duties, but we take more responsibility than just brokering a deal because our focus is to train Korean companies to have the capability to do business with foreign partners directly. We support companies with our expertise and know-how in global sales. The name of the company, EMC Global, actually comes from Export Management Company.

What motivated you to start the company?

I was in the overseas sales division at an SME that produced electronic parts for about 10 years. I realized that SMEs without any experience in overseas business need some kind of consulting option to help them with exports.

What project are you working on now?

I’m currently consulting with seven SMEs to help them enter overseas markets and build partnerships with foreign buyers based on a memorandum of understanding.

What difficulties do you face?

The most difficult part for me is that many SMEs treat me like I’m some kind of broker. Their underlying attitude is basically “Introduce me to a buyer and I’ll pay you if things go well.”

What is something that Korean SMEs lack when it comes to exports?

It is entrepreneurship, or a CEO-like mindset.

The size of their business might have grown over 20 to 30 years of operations in the domestic market, but most CEOs lack an understanding of overseas markets. What’s more important than language fluency is their mindset toward business.

Very often, they have problems communicating with foreign buyers. Korean companies only talk about their demands during meetings. They lack the capability to listen to what foreign companies have to say.

For example, foreign buyers often say “It is like talking to aliens when we meet with Korean SMEs.” Engaging in overseas business doesn’t mean only insisting on your hopes and demands. It begins from listening to the demands of your counterpart. It is important to find common ground between the two parties and cooperate.

Why do you think this is the case for Korean SMEs?

Korean companies tend to think that starting an overseas business is easy. I’ve witnessed a lot of companies that start export consulting with a woefully small amount of preparation or consideration about the reality of venturing abroad.

Even when you look at their product catalogues, about 80 to 90 percent of Korean SMEs do not have English versions. It is important that they put effort into making [foreign buyers] interested in their companies. The first thing to do is to nicely package what you have.

There are already many programs that support companies starting an overseas business, but still a lot of CEOs do not even look into what options are out there.

Do you have a message for SMEs hoping to enter an overseas market?

Unless you have stable earnings and a sizable business, you shouldn’t think about starting exports. If you have to worry about money, don’t even think about exports as an option. Overseas sales cannot be a breakthrough for your business. You first need to make investments on intangible assets before venturing abroad. Chance rarely comes out of nowhere.

What’s the most memorable company you’ve worked with?

There was a time I worked with a pipe manufacturing company that wanted to participate in a desalination project held in Saudi Arabia. After three meetings with Saudi Arabian buyers, we realized that there are a lot of regulations such as preferential purchasing programs for locally-produced pipes.

I advised the company to make a bold decision and give up on exports [there] considering the unfavorable conditions. Instead, we decided to target the Vietnamese market where there were less regulations and succeeded. Rather than just counting on instincts or data, you should always visit the actual site. Don’t just swallow rumors and run to secure orders that could determine the fate of your company.

The title of your book is unique.

I learned how to sell things while working for an SME after graduating college. Then I left work for about two years after getting married. It was hard to return to work after a two-year break.

In the end, the company that I used to work for before leaving my job took me back. I was assigned to a sales department and I ran around places in a suit and high-heels to consult with clients. Sometimes, I even had to supply the parts myself by loading tens of boxes of electronics parts into the backseat of my car. Wherever I needed to be, I was there. I learned a lot during that time.

You have experience of struggling to return from a career break.

It was a lonely time for me because finding a job was very difficult. I felt betrayed by society. I was often devastated that I couldn’t go back to work. But every bit of life is meaningful if you see it as a long journey. It takes time, but if you really have a strong will, there’s always a place to work. I want to tell others not to lose courage and always take another step, even in despair.

Do you have a message for young jobseekers?

You can’t expect good treatment without putting any effort into improving your capabilities. Don’t always go for easy options, but always put your effort and time into becoming a better person. Before memorizing more English vocabulary, think about what kind of person you actually want to become.