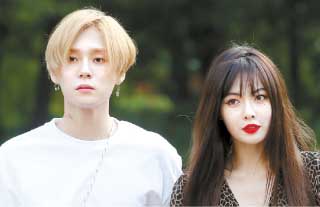 E’Dawn from boy band Pentagon has officially parted ways with Cube Entertainment, just two years after he debuted with the group.

The agency came to an agreement with E’Dawn to terminate their exclusive contract with the singer, according to an announcement made Wednesday afternoon. The news comes just one month after his girlfriend, HyunA, also ended her contract with the agency.

Following the announcement, both HyunA and E’Dawn posted several photos of E’Dawn on social media.

The two singers, who were also both part of the group Triple H, went public with their relationship in August. Following a report by local entertainment news outlet TV Report that the two were dating, Cube Entertainment released a statement saying that the article was false. The couple, however, refuted the agency’s denial the next day during an interview, and confirmed that they were actually a couple.

On Sept. 13, the agency announced that it would end its contracts with both singers, which led to outrage from fans and a dip in the company’s stock prices.

After the agency terminated its contract with HyunA in October, the singer posted a handwritten letter saying that all of her scheduled appearances had been canceled by the agency after she went public with her relationship and that she had done nothing wrong to deserve such treatment.