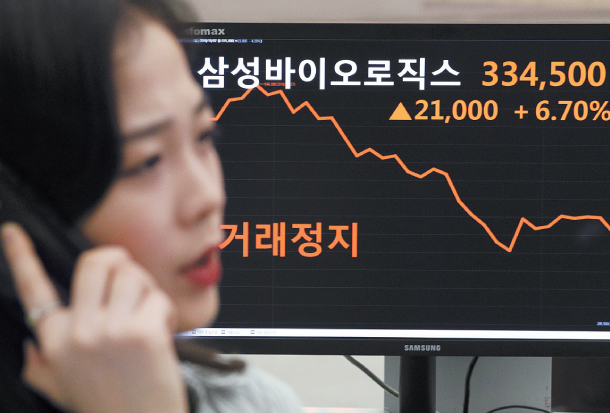 A signboard at the Korea Exchange in western Seoul says trading in Samsung BioLogics is suspended on Thursday. [YONHAP]

The accounting fraud penalties slapped on Samsung BioLogics Wednesday could take a toll on investment sentiment in general and specifically for bio stocks on local stock markets that are already skittish, analysts warned.

Major uncertainties are unfolding in two directions: whether Samsung’s biotechnology unit will face delisting, and whether any future investigation penetrates the group’s leadership including its de facto CEO Lee Jae-yong.

Following its ruling Wednesday that BioLogics violated accounting rules, the Financial Services Commission (FSC) suspended trading in the Kospi-listed company to investigate whether its initial public offering was based on genuine accounting and financial statements. On top of the trading restriction, the FSC also imposed fines and recommended prosecution of the company.

Those tough measures could spook investors on the broader Kospi market, given the size of BioLogics. BioLogics quickly emerged as a major player on the Kospi after its public debut in 2016. Its market capitalization of 22.1 trillion won ($19.4 billion) is the sixth largest on the bourse.

“The suspension of trading in Samsung BioLogics could cool investment sentiment in the local stock markets,” said Kim Hyung-ryeol, an analyst at Kyobo Securities.

“Since the bio sector is largely dependent on retail investors, distrust in the segment could develop into pessimism about the Korean stock market,” he said.

It remains to be seen when - or whether - the suspension will be lifted. Korea Exchange, operator of Korea’s trading floors, will decide whether to resume trading 15 days after the FSC’s order. The operator can request another 15 days for further deliberation when more time is needed.

If Korea Exchange believes no further investigation is needed, the restriction will be lifted right away. But if needed, the market operator can decide on follow-up measures - requesting improvements from the company while its stock trading is suspended, or even calling for delisting. The maximum period allowed to fix problems while trading is suspended is one year.

Still, the worst-case scenario - delisting - is unlikely as noted by analysts and even the FSC’s vice chairman, Kim Yong-beom, on Wednesday.

“We see a slim chance of the company actually facing a delisting,” said Hong Ka-hye, an analyst at Daishin Securities, “All of the 16 Korean companies that have been reviewed for similar issues have avoided delisting.”

Meanwhile, the feared ripple effect did not materialize on Thursday as the Kospi edged up 0.97 percent to close at 2,088.06 compared to the previous trading day.

Other major bio stocks were barely affected with Celltrion soaring 5.05 percent and SillaJen up 2.75 percent.

Analysts said that the BioLogics issue would not hurt market fundamentals of bio companies and the FSC’s decision actually resolved uncertainties surrounding BioLogics.

But not all were so sanguine. The share price of Samsung C&T shrank 2.37 percent because BioLogics’s fraudulent accounting practice could be linked with Samsung’s controversial merger of Samsung C&T and Cheil Industries. The merger in 2015 was considered a maneuver to facilitate leadership transition at Samsung Group.