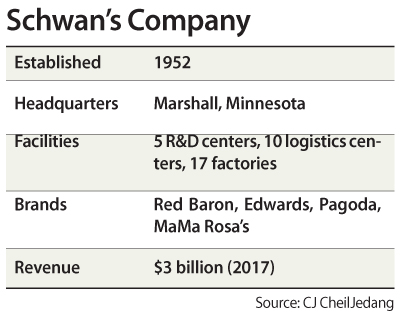 The Korean food company publicly announced Thursday that its board of directors has approved the acquisition with Schwan’s Company. The deal will make CJ the dominant shareholder with a 99.98 percent stake in the American company. This is the largest acquisition deal in CJ Group’s history.

Established in 1952, Schwan’s is the No. 2 manufacturer of frozen pizza in the United States and No. 1 in frozen pies and appetizers. Its annual revenue last year is estimated at $3 billion. Among Schwan’s most famous brands are Red Baron, Edwards, Pagoda and MaMa Rosa’s. CJ will not be acquiring the U.S. company’s home delivery service, which is currently struggling in the red.

In its public announcement to shareholders, CJ explained that the main purpose of the deal was to accelerate its global food business by strengthening its foothold in the United States.

“Schwan’s Company has business all over the U.S. market,” the company said in a statement, “the acquisition will boost CJ CheilJedang’s driving force to expand in the United States where the market for processed food is the largest in the world.”

After starting sales of frozen dumplings in the United States in 2009, CJ now operates five factories in the country. With the addition of Schwan’s factories, this figure will jump to 22.

The U.S. company also owns 10 distribution centers, which means CJ will be get access to the complete existing infrastructure from manufacturing, distribution to sales thanks to this single deal.

CJ’s Bibigo dumplings have been selling well in the U.S. market, but its distribution channels are limited to a few major retailers like Costco.

Another advantage of the acquisition is Schwan’s know-how in the American frozen food market.

CJ CheilJedang has openly cited promoting Korean food worldwide as a corporate mission in the last few years, and one way they’ve been doing that is by slightly modifying recipes to suit foreign markets. Schwan’s experience will help it develop new recipes based on pizzas, pies and appetizers with a Korean twist.

“The U.S. frozen food market is showing slow growth, but the market for Asian food is steadily expanding at a speed of four to five percent [every year],” said CJ. “We might be able to expand K-food to neighboring countries in Canada and Mexico as well.”