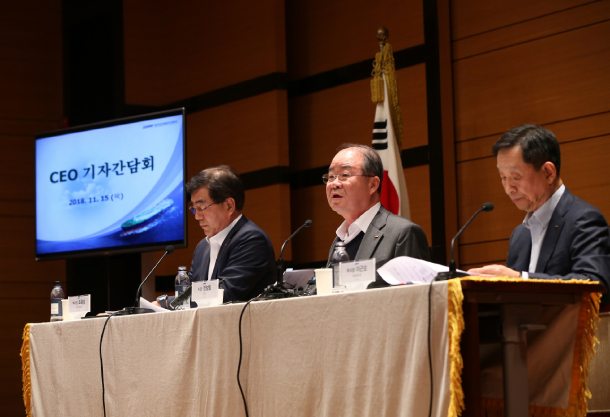 Daewoo Shipbuilding and Marine Engineering (DSME) may not need to lay off as many employees as originally planned, largely thanks to its higher-than-expected earnings this year.

Under the original turnaround plan submitted to creditors in 2016, the shipbuilder was due to cut down its workforce to less than 9,000 employees by the end of this year. The company has already cut more than 3,000 jobs, with the workforce reduced from 13,199 in 2015 to 9,960 in June this year.

“When we said we would reduce our total number of employees to less than 9,000, we were expecting 7.5 trillion won [$6.7 billion] in revenue this year and 4.5 trillion won next year, but the situation has changed,” said Jung Sung-leep, chief executive of the shipbuilder during a press briefing in Seoul on Thursday.

According to Jung, the company is looking to ink more than 9 trillion won in revenue this year and over 7 trillion won next year, which is roughly 2 trillion won ahead of projected earnings for 2019 and 2020.

“Restructuring is, of course, necessary, but I feel the terms must be adjusted with flexibility depending on our actual management situation,” Jung said, adding that reducing the workforce without taking into account the size of its current business could damage productivity.

Jung declined to comment on how many layoffs he expects are still to come, however, adding that the numbers could be finalized in discussions with creditors after the ongoing due diligence on the company ends this year. The due diligence will check on the company’s progress in its proposed turnaround measures.

According to the DSME head, the company has achieved 60 percent of its 2020 target to improve financials by 5.8 trillion won by selling assets and subsidiaries as well as laying off employees and improving productivity.

One positive sign was the wave of new orders the company inked this year, achieving roughly 75 percent of this year’s $7.3 billion sales goal as of Thursday.

Jung said the company will likely hit the target, though there are challenges as well - the chance of winning an important offshore plant order from the Rosebank project this year has grown slim.

DSME was shortlisted for the roughly 2 trillion won offshore plant order from the gas and oil extracting project previously led by Chevron. Chevron pulled out of the project last month and sold its 40 percent stake to Norwegian energy company Equinor, making it unlikely that the winner will be finalized this year.

Despite ongoing restructuring, Jung said it’s crucial to have young talent, especially in research and development, to keep the company afloat in the future when manufacturing industries, including shipbuilding, is quickly reshaped by technological advancement and emissions regulations.

At the beginning of this month, the shipbuilder opened up graduate recruitment for the first time in four years, although there are not many positions available. The company did not give specific numbers, but around 50 new hires are expected.

On a recent complaint by the Japanese government filed to the World Trade Organization arguing that funding from a state-run bank to DSME in recent years has disturbed the global market by making the shipbuilder launch a price war, Jung said the argument is unreasonable and funding from the state-run Korea Development Bank was based on a commercial judgment that there is higher value in keeping the company afloat than allowing it to go bankrupt.