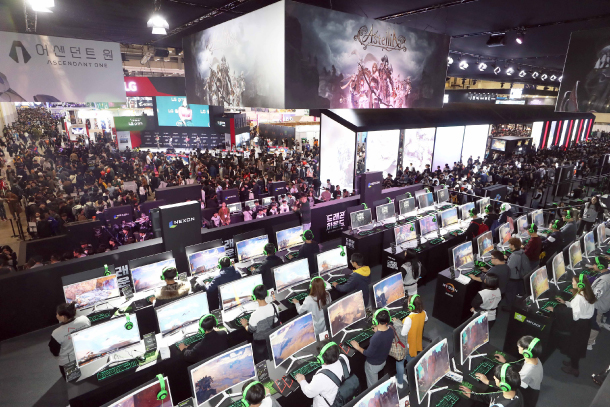 A total of 689 companies from 36 countries set up booths at the four-day gaming festival, the most ever in the 14 years that the event has been held. Among them are major game developers as well as companies in related industries, such as game gears and live streaming.

G-Star has been attracting more companies and visitors each year, with 225,392 people attending in 2017. Industry watchers estimate that the event will draw a total 230,000 visitors this year. In part, the higher attendance is the result of the College Scholastic Ability Test being held on the opening day of G-Star, which runs through Nov. 18.

Last year, the exam was postponed by one week due to earthquakes in Pohang, North Gyeongsang. Test takers might have enjoyed some time at the event after their exams but could not due to the revised schedule.

Game company booths at G-Star are equipped with computers and smartphones with games installed so that visitors can freely try them on site. Developers often allow visitors to test games not yet released or still under development, giving fans a hint of the direction for next year.

An ongoing trend is the rise of mobile games. At the annual Korea Game Awards held on Wednesday, no PC games were nominated as candidates for the grand prize. The award celebrates the best games of the year among PC, mobile and console games. 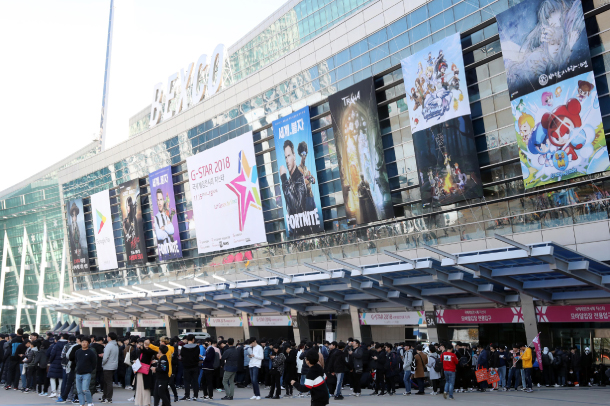 The G-Star game festival opened with a record 689 participating companies from 36 countries on Thursday in Busan. [YONHAP]

Nexon presented 11 mobile games and three PC games at G-Star. The company organized the largest booth among all participants. Four of the mobile games offered are mobile versions of Nexon’s PC game classics from the 2000s and early 2010s, like the Kingdom of the Winds and Mabinogi, which Nexon hopes will attract nostalgic users.

Global game company Epic Games was the main sponsor for this year’s G-Star. This is the first time a foreign company took on that role. Its main game brand promoted at the venue was Fortnite. Epic set up the game in mobile, PC and console versions at its booth. The company just started offering services at local internet cafes this month and is working to increase brand awareness.

Busan Mayor Oh Keo-don expressed the desire to develop the city into an Esports mecca on Thursday at G-Star’s opening event.

Oh stressed the importance of keeping Busan as the host city of G-Star. “The most famous global game festivals are held at one fixed spot. For G-Star as well, it’s important that it keeps Busan as part of its permanent image,” he said.

He also mentioned plans to establish a game complex in Busan by 2022 with an investment of 100 billion won ($88.2 million).

It will host companies in the gaming industry and include an Esports tournament hall, game museums and training and research centers.