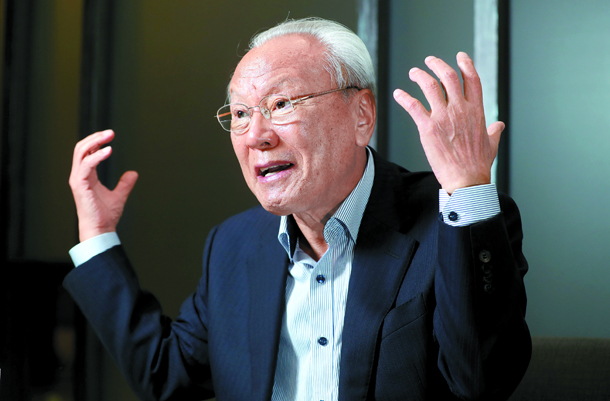 Park Seung, Former governor of the Bank of Korea


Park Seung, the 82-year-old former central bank chief, is considered one of President Moon Jae-in’s economic mentors. He played a major role in drawing up Moon’s economic initiatives, also called J-nomics, when serving as an adviser at a presidential campaign think tank.

The JoongAng Sunday sat down with the former Bank of Korea governor to discuss challenges and tasks that lie ahead for the new economic team.

Q. The president reshuffled the government’s economic team. What do you make of the changes?

A. In the beginning of the Moon administration, it was too focused on predetermined principles and goals to generate meaningful results. Economic efficiency can be realized when [the government] respects market efficiency and economic signals. The new team should devise polices that adjust to the economy instead of being obsessed with keeping earlier presidential pledges. The decision to shift the leadership should be seen as favoring economic efficiency and practical economic policies.

What are the major tasks of the new team?

It should be able to follow the direction of the markets. It can certainly stick to the major objectives of income-led growth, but it also needs to embrace more market and corporate-friendly policies while maintaining a concern for low-income people. Economic bureaucrats tend to have a more powerful drive and an ability to organize people and resources than those in academia. I hope the new members will demonstrate those skills. The economic team needs to take an open and flexible approach to personnel. For example, they should be able to hire someone from the private sector if the person has expertise related to the real economy. Still, it will be challenging to provide spectacular results in times of low growth. It is time to think of a long-term solution rather than being trapped in established ways of solving problems.

Different institutions warn that the Korean economy is facing a crisis. What is the problem?

Korea is at crossroads, making a transition from old growth engines to new ones. A combination of problems — low growth, high unemployment and the growing gap between the rich and poor — is a byproduct of the transition.

On the demand side, Korea has relied on exports and the manufacturing sector to drive growth, expecting a trickle-down effect. But that model had run its course by the time of the 2008 financial crisis. Korea is set to enter the area of 2 percent growth and demand-driven, not export-driven, economy. The public needs to accept the low-growth reality. To avoid the course that Japan took — the so-called lost decade — Korea needs to find a new economic direction.

Korea’s domestic consumption is still too weak from the economy to become demand driven. What do you think about this issue?

It does take a while to increase domestic consumption. But the main obstacle is the increasing income gap between the rich and poor and between corporations and households. For example, corporate net profit jumped 21 percent two years ago, but household income actually declined 0.4 percent. There is no virtuous cycle. The home market won’t improve when households hold back spending. To expand domestic demand, the government should make an effort to resolve the income polarization and boost corporate investment.

The investment, for sure, comes from companies. But what do you think of the view that the current government only takes a heavy-handed approach when clamping down on conglomerates?

As the current government pays more attention to labor unions, those in industry might think that things are not good for them. So, first and foremost task, the government needs to expand corporate investment. To achieve that goal, labor reform and deregulation is the only way to go. On the corporate side, they also should not just blame the government for less investment. They have accumulated about 200 trillion won ($177 billion) of reserves, and they justify this by saying that they cannot get the returns in Korea.

The market size is small, and costs affected by wage hikes and aggressive labor unions deter corporate investing. The revision of the laws related to the sharing economy services has been put on hold because of opposition from different interested parties. The government should set a broad principle that any regulation that hampers growth should be abolished. As for the affected industries and people, the government could come up with supportive measures.

But how can the government draw more corporate investment?

Corporate tax cuts or other support would have their own limits in terms of attracting investment. Bold labor reform and deregulation measures could lead to corporate investment. Inter-Korean exchanges could provide opportunities to break out of low growth, too.

What’s your view of the income-led growth policies?

I support the idea of boosting domestic demand with the increase of income and closing the income gap, because we can’t just go backward to the trickle-down era. Still, one should not be boxed in certain dogmatic ideas. For example, it is not ideal to exclude all conglomerates when we discuss the easing of the Banking Act for internet-only banks to bring non-banking players into the field. The government should present more practical policies to win the hearts and minds of the public.

How do you assess the Moon government’s economic policies so far?

The overall direction is right, but the way of implementing it has some problems. The issue of low growth, high unemployment and increasing polarization are all structural problems that require a long time to be addressed. But the government appeared to be in a hurry to make achievements in the short run. Economic efficiency went down as the government made errors in implementing minimum wage hikes and the 52 working hours. As for the minimum wage hike, the government should have moved it up gradually — 7 to 8 percent a year, not a 29 percent increase in two years. Even if the principle is right, the government should take into account market reaction.