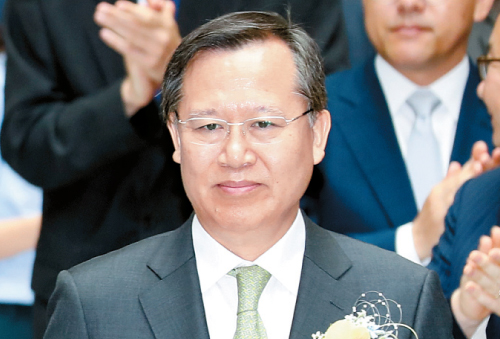 Prosecutors broke precedence by summoning a former judge on the country’s highest court to question him on allegations that the Supreme Court deliberately shelved a damages suit by Koreans forced into labor during Japanese colonial times to curry favor with the previous administration.

The subpoena was issued amid new revelations Thursday that former President Park Geun-hye directly interfered in the trial.

Former Supreme Court Judge Park Byoung-dae was asked to show up at the Supreme Prosecutors’ Office in southern Seoul next Monday. Prosecutors say they plan to bring in another former justice, Ko Young-han, by the end of this month.

Park Byoung-dae, who also held the post of National Court Administration (NCA) chief from 2014 to 2016, is accused along with ex-Chief Justice Yang Sung-tae of colluding with the Park Geun-hye administration to delay and possible rule against Korean plaintiffs who sued Japanese companies for forcing them to work during World War II.

This is the first time a former Supreme Court Justice has been formally summoned on accusations relating to power abuse within the highest ranks of the judiciary, which was allegedly orchestrated by Yang, who served most of his term under President Park Geun-hye from 2011 to 2017.

Under Yang’s watch, the country’s highest court is accused of influencing important trials to curry favor with the Park administration, a violation of the constitutional principle of separation of powers. In return, Yang allegedly expected Park Geun-hye’s help to establish a new appellate court to cut down on the Supreme Court’s heavy workload.

The forced labor suit was perhaps the most significant case in which Yang, Park Byoung-dae and other justices are said to have intentionally delayed to ingratiate themselves with the former president who was later impeached and removed from office for abuse of power and corruption. She is now jailed.

According to a written arraignment of Lim Jong-hun, a former deputy head of the NCA and a key figure in the case who was indicted on Thursday, Park Geun-hye ordered the Foreign Ministry in April or May 2016 to “let its intentions be known to the Supreme Court within a month or two and finish all processes [related to the forced labor trial] by August,” because her administration was planning to set up a foundation with Japan to settle the so-called comfort women issue in June.

Prosecutors believe that Park’s preoccupation with settling historical disputes with Japan was influenced by a personal desire to defend her father’s legacy as Korea’s leader from 1961 to 1979. Under Park Chung Hee, Korea signed a treaty with Japan in 1965 that relinquished reparations for individuals in return for a lump-sum settlement.

That treaty was directly challenged by a handful of Koreans who sued Japanese companies for forcing them into labor during Japan’s colonization of the Korean Peninsula in the early 20th century. Fearing a fallout in diplomatic relations with Japan, the Park government is believed to have asked the Supreme Court to postpone rulings on the matter as long as possible, during which nearly all of the original plaintiffs passed away.

It took Park’s impeachment and removal last year and a change in leadership in both the country’s executive branch and judiciary for the Supreme Court to finally rule on the forced labor case. On Oct. 31, the court ordered Japan’s Nippon Steel & Sumitomo Metal to compensate four Korean plaintiffs.

The allegations about the forced labor suit was not the only accusation leveled against Yang’s Supreme Court. The former chief justice reportedly also used politically sensitive trials as bargaining chips and kept a blacklist of judges based on their political leanings.

With their investigation into Lim nearly complete and after questioning the former Supreme Court judges, prosecutors are likely to finally go after the prime target in the case - Yang Sung-tae himself.