Latvia and Korea enter a new era as diplomatic partners

Latvia and Korea enter a new era as diplomatic partners 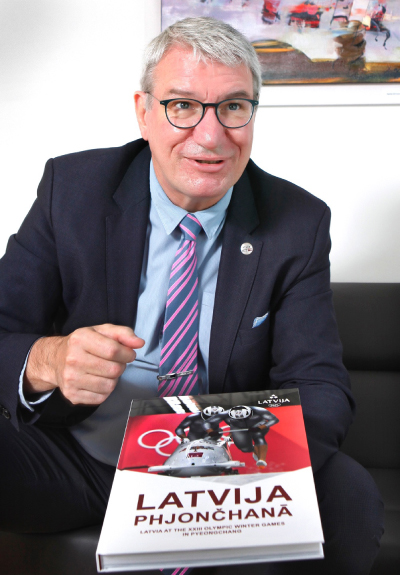 As he celebrates 100 years since the proclamation of the Republic of Latvia, Latvian Ambassador to Korea Peteris Vaivars emphasized the role that public diplomacy can play to bring the Baltic country closer to Korea.

“Without successful public diplomacy, it is impossible to build any trade or business relations,” he told the Korea JoongAng Daily. “Especially for countries with limited human resources, we need to focus on how to build friendly and mutually beneficial relations. To do that, we have to first bring together the people. When more Latvians know Koreans and Koreans know Latvians, it brings out positive emotions and that transfers onto trade, business and other relations.”

Latvia is celebrating its 100th birthday this year. This summer, it held its famous nationwide song and dance festival, which featured as many as 20,000 people singing together at once.

“The song and dance festival is held once every five years in Latvia, and it is a Unesco intangible heritage,” Vaivars said. “We have 20,000 singers and 20,000 dancers participating in gala concerts. The next event will be in 2023, and that will be the 150th anniversary of this tradition.”

The Latvian Embassy in Seoul is bringing the famous tradition of Latvia to Korea this week by hosting performances by the country’s Emils Darzins Mixed Choir throughout the country, including at Pyeongtaek University in Gyeonggi; the National Museum of Korea, Spazio Luce Concert Hall and the Shinchon Evangelical Holiness Church in western Seoul.

“I hope hundreds of Koreans will come and see the performances and think about making a trip to Latvia,” he said.

The top envoy is the first Latvian ambassador to Korea, as the Latvian Embassy in Seoul opened in late 2015. Korea opened its embassy in Riga, the capital city of Latvia, in 2013.

“When I arrived in Korea years ago, I visited major libraries here to get a feeling of what was available on Latvia - and almost nothing was available,” he said. “Since then we have been very focused on educational exchanges between the two countries. We have scholarships for Latvian students in Korea and Korean students in Latvia and we’ve recently made some progress on bringing a course on the Latvian language to Korea.”

Hankuk University of Foreign Studies started providing a course on the Latvian language and another on Baltic regional studies this spring.

“The Latvian Ministry of Education signed an agreement with Hankuk University of Foreign Studies recently on cooperating and building more materials on Latvia at the university,” he said. “They include books, teaching materials, as well as professors and teachers.”

The Latvian Embassy in Seoul also intends to publish a Korean edition of “Latvia 100 Snapshot Stories,” a book from the Latvia Institute, in the near future.

The PyeongChang Olympics in Korea were another venue where various countries could practice public diplomacy, Vaivars added.

Latvian President Raimonds Vejonis visited Korea during the Olympics and met with President Moon Jae-in. The two discussed cooperation on trade and investment as well as regional security. Vejonis was the first Latvian president to visit Korea since the two nations established diplomatic relations in 1991.

The two leaders spoke of establishing an economic council involving the three Baltic States - Latvia, Lithuania and Estonia - and Korea.

“Latvia is currently one of the major suppliers to Korean shipbuilding industry,” he said. “Samsung and Hyundai Heavy Industries use Latvian plywood as an insulation material for LNG tankers.”

For future cooperation on the business front, the top envoy said he is hoping that the first direct flight between Seoul and Riga will begin in the near future.