The Seoul Metropolitan Government announced last year a three-year plan to lead an effort to connect cities and local governments throughout the world to share best practices on global issues. In this three-part series, the Korea JoongAng Daily follows the Seoul city government to destinations abroad as it makes new contacts and looks at the work of some international organizations in Seoul. -Ed. 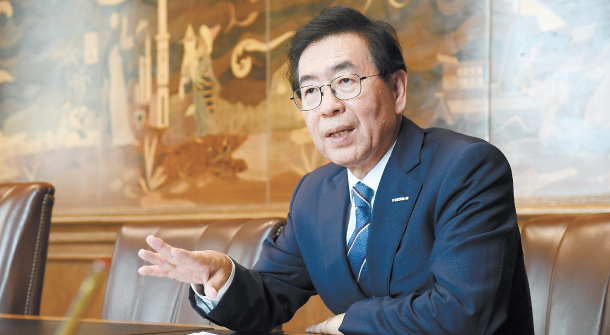 Seoul Mayor Park Won-soon is often cited as one of the most innovative mayors in the world.

“Innovation and Seoul — it’s not hard to make a connection between the two words these days,” said Park, who began his third term in office this year.

In a recent article, the magazine Monocle likened Park to Luka Modric on a soccer field, a midfielder who is a “sensible yet creative distributor at the centre of everything.”

Park says the global attention lavished on Seoul has a lot to do with the administration’s city-to-city diplomacy.

“The big factor that led to this image of Seoul as an innovative city is the city-to-city diplomacy that I have been pursuing since the beginning of my tenure,” Park said. “After I was sworn in as mayor, the city government established the Global Urban Partnership Division and the Seoul Urban Solutions Agency to export Seoul’s innovative solutions to other cities.”

Seoul has exported 65 of its policies to 52 other cities in 31 countries since 2006, and 80 percent of these occurred during Park’s tenure. They range from best practices and systems on public transportation, water works, e-government and city planning to environment and disaster relief.

The Seoul city government announced a three-year city diplomacy plan last year. It includes a plan to expand its ties with other cities to export Seoul’s best practices and become a hub for international organizations.

The following is an excerpt from an interview with Park on his visions and objectives for Seoul’s diplomacy with cities and regions around the world.


Q. What is your vision for Seoul’s city-to-city diplomacy?

A. I think it can be summed up by what Benjamin Barber once said — “Presidents pontificate principle; mayors pick up the garbage.” That’s city-to-city diplomacy in one sentence. The global challenges we face today — climate change, natural disasters, air pollution and inequality in societies — are evolving to be ever more complex. Solutions often require a united effort from cities and governments. But there are limits to country-to-country diplomacy because of the various ideological, political and national interests of each country.

Cities are different. Cities can put efficiency and practicality before other interests. The administration at the city government level can be more flexible and can plan its actions mainly based on the current and future well-being of its residents. And for this, cities can work together through various city-to-city networks.

This is why I expanded the role of Seoul city government in practicing diplomacy, a role that was traditionally considered limited to central government, to move beyond signing friendship accords and co-hosting events to sharing best practices and policies with other cities. As of this year, we’ve exported 65 policies to 52 cities in 31 countries.

We are, in a sense, exporting Seoul.

What may be a necessary next step for Seoul’s successful city diplomacy?

The laws will have to change to allow more independence for local governments to manage bureaus and departments to allow the Seoul city government more freedom and jurisdiction in its city diplomacy.

How does Seoul coordinate with the Ministry of Foreign Affairs regarding its diplomatic activities?

This Foreign Ministry practice has been around since 1992. This year’s ambassador at the Seoul city government is Yim Geun-hyeong.

Do you intend to turn Seoul into a hub of international organizations?

For this, Seoul will continue to lead through organizations where it is a president city — the World Smart Sustainable Cities Organization, Citynet and Global Social Economy Forum. We will also expand spaces in the city friendly for international organizations in addition to current venues like the Seoul Global Center building and Seoul Innovation Park.

What are some of the more popular policies of Seoul among those exported?

More than half of the policies exported concern public transportation, including railroads. Many cities know now that Seoul’s e-government is No.1 and has been for the past 14 years.

The use of a big-data system in my office to deliver information on disasters and accidents in the city in real-time is also popular among cities.
Seoul’s smart city development policies have also gained a lot of attention after the city was awarded the Lee Kuan Yew World City Prize this year.

In Seoul today, citizens are at the center of projects as small as building a playground in a residential area to as big as establishing the foundational principles of city planning.

In the past, Seoul has been plagued by repeating its mistakes in urban development — namely, renovating areas by completely demolishing structures and rebuilding anew. Incorporating citizens’ voices in development projects is a necessary step to prevent this type of renovation. I am glad that Seoul’s citizen-inclusive policies have been acknowledged internationally through the awarding of the Lee Kuan Yew World City Prize.

Seoul has recently concluded urban development projects like the Seoullo 7017 overpass park, the renovated Sewoon Plaza, Gyeongchun Line railway park and the Oil Reservoir Culture Park in Mapo [in western Seoul]. It is continuing 133 other projects throughout the city to renovate and develop the city.

Seoul will continue to plan urban renovation projects with the residents at the center of it all. We will try to ensure that economic activities and profits from the redevelopment projects benefit the people directly.

This is your third term in office and seventh year as mayor of Seoul. How do you think the world’s perception of Seoul has changed from when you began your tenure?

I hear more often that Seoul is an innovative city. Innovation and Seoul — it’s not hard to make a connection between the two words these days.
The New York Times wrote a piece about how Silicon Valley should learn from Seoul, and the Nation wrote about how cities including Seoul can be “beacons of pluralism” to counter nationalist movements like the one driven by U.S. President Donald Trump.

I think the biggest factor that led to this image of Seoul as an innovative city is the city-to-city diplomacy that I have been pursuing since the beginning of my tenure.

After I was sworn in as mayor, the city government established the Global Urban Partnership Division and the Seoul Urban Solutions Agency to export Seoul’s innovative solutions to other cities.

Recently I received a letter from the mayor of Chanchamayo in Peru, who expressed his gratitude for six years of cooperation with Seoul that has led to clean water at affordable prices for the people. It’s all a result of the hard work of the city’s government officials.

Did you find any examples of smart city development that could be applied in Seoul during your recent trip to cities in Europe?

One of the examples that stood out for me was the Fab City Global Initiative in Barcelona. The initiative intends to increase the level of self-sufficiency of the city to more than 50 percent by 2054, so the city will produce at least half of everything it needs within the city. At the Fab City lab, we saw how architects and designers were working together to apply innovative solutions in daily production to make the city more sustainable and futuristic. It was an opportunity to meet lots of talented people in the area, including a Korean student who was interning there.

But what struck me the most about the initiative was that an experiment like this was being run on a local level without any government support.

I suggested some innovators at the lab to visit the Seoul Innovation Park as well. Fab labs [local labs for entrepreneurs to experiment with applying digital innovation and technologies to manufacturing] do not have as big a presence in Asia as they do in Europe. I hope to cooperate with stakeholders in Europe to bring this culture into Asia, using Seoul as a hub.

Any plans on the Seoul-Pyongyang diplomacy front?

There was an informal agreement at the third inter-Korean summit that the two Koreas will cooperate on activating exchanges between local governments between the South and the North.

In possible future cooperation opportunities with Pyongyang, the Seoul city government intends to start with providing solutions on water quality improvement on the Taedong River and reforestation efforts.