Naver says its Green Dot is the future of searching

Naver says its Green Dot is the future of searching 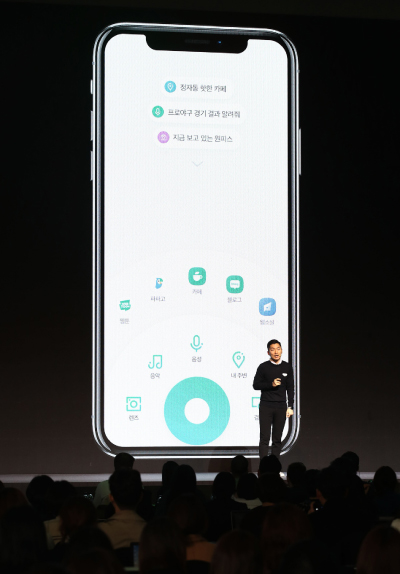 Naver’s iconic green search bar may one day be a thing of the past - at least in the mobile app.

Korea’s most popular portal site is experimenting with a new tool called the Green Dot that allows users to search for information not only by text, but also by voice, location and photos.

The Green Dot was first unveiled last month. It is what the company calls an “interactive search” button located at the bottom of Naver’s app.

When touched, the button opens a small window that offers various search functions like voice recognition, music recognition and recommendation on trending restaurants and bars nearby. The user can also add short-cuts to frequently used Naver services, from blogs to shopping.

“Naver’s green search bar was developed at a time when searching online through PCs was about keywords and being linked to [web pages with] text information,” said Kim Seung-eon, the portal giant’s design head, at the Naver Design Colloquium held Friday in Dongdaemun, central Seoul. The annual event invites Naver designers to share their strategies and design insight.

“But now with mobile, [portals] aren’t just about new information; we listen to music, reserve restaurants and use services that are closely linked to our daily lives. There are so many usages now and ways to input information. The Green Dot integrates all these; it’s the start of a new way to search and connect.”

Kim added that the Green Dot will be the new design identity of Naver and a core function related to services coming in the future.

The portal giant also shared the results of its first page overhaul on its mobile app.

Last month, Naver introduced a new first page of its mobile app that left out news and trending keywords, leaving nothing but the search bar, weather information and the Green Dot.

Its explanation was that the change was purposed to put a larger emphasis on searching, which accounts for 60 percent of why users turn on the Naver app. The change was available as a beta service.

According to Naver, some users felt that the blank space was awkward, but the beta service had also showed meaningful results: the amount of time users spent on the app increased 15 percent and the number of searches rose 20 percent.