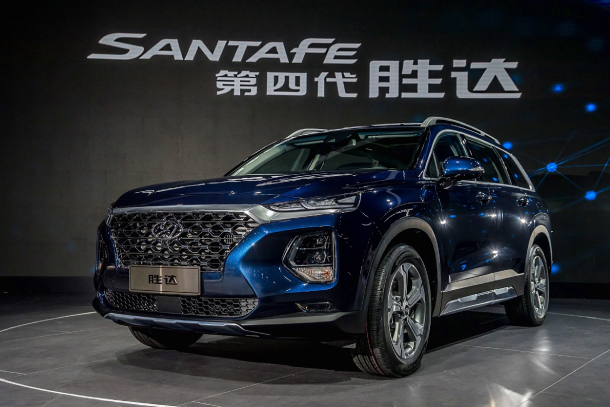 Hyundai Motor showcases the new version of its flagship Santa Fe SUV designed for the Chinese market at the Guangzhou International Automobile Exhibition on Friday. The auto fair runs until Nov. 25. [HYUNDAI MOTOR]

Hyundai Motor premiered the latest version of its Santa Fe SUV at an international auto exhibition in Guangzhou on Friday in its latest move to try and woo Chinese buyers.

It also rolled out a reshuffle of its Chinese business. Vice President Lee Byung-ho was promoted to president of Hyundai Motor and Kia Motors’ China Business Division, the carmaker announced Friday.

The automaker showcased the fourth-generation Santa Fe, which has been strategically modified for the Chinese market. The new edition is the most futuristic Santa Fe on the market anywhere in the world, including the models sold in Korea.

After hitting rock bottom in the past two years due to diplomatic tension over the deployment of the U.S.-led Terminal High Altitude Area Defense antimissile system in Korea, Hyundai Motor has been slow in recovering sales in China. In the third quarter, it sold 177,000 units, a 6.2 percent year-on-year drop.

Hyundai Motor said it has installed a fingerprint scanner on the door - a global first - allowing owners to lock and unlock the door without a car key. The fingerprint scanner can also turn on the engine and automatically adjust the seat and side mirror to the owner’s liking.

The new version is also bigger than the latest Santa Fe that launched in Korea in February.

The length was extended by 160 millimeters (6.3 inches) and the wheelbase by 100 millimeters, enlarging the space for the second and third row passengers. Other smart car technology included in the vehicle is similar to the version available in Korea.

The car is equipped with a Rear Occupant Alert system that alerts the driver when a passenger is left behind in the back seat through ultrasound detection. It is the first time Hyundai Motor has installed such a system in cars launched in China.

The Santa Fe is also equipped with Safe Exit Assist, which prevents collisions with oncoming traffic when exiting the vehicle.

The car is also equipped with voice recognition through a partnership with Chinese IT giant Baidu.

“The latest Santa Fe stands in the center of Hyundai Motor’s continuous attempts and innovation toward the ever-changing needs of the customer,” said Beijing Hyundai in a statement. “The Santa Fe will bring about changes in the premium SUV market in China with its top-notch safety and smart car features.”

The car will go on sale starting in the first quarter of next year in China.

Hyundai Motor set up a 1,820-square-meter (19,590-square-feet) booth at the Guangzhou International Auto Exhibition where its latest lineup of 18 cars, including a concept version of the large Grandmaster SUV and N series vehicles, such as the Veloster N and i20 WRC, were on display.

It also showed off its hydrogen-powered Nexo SUV.

The auto exhibition in Guangzhou runs from Saturday to Nov. 25.