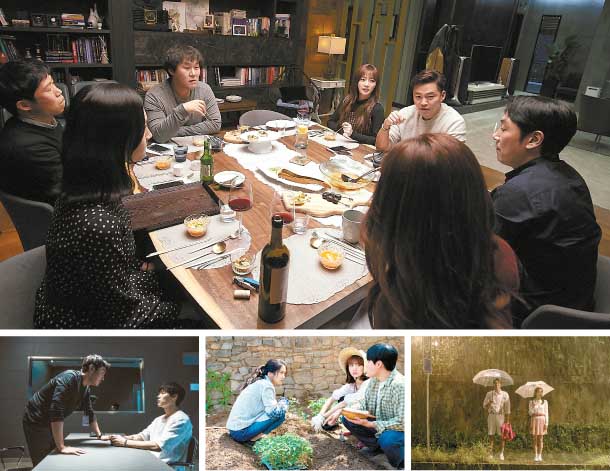 Clockwise from the top are scenes from “Intimate Strangers,” “Be With You,” “Little Forest” and “Believer.” Based on popular foreign titles, the Korean adaptations of these movies performed successfully at the local box office. [LOTTE ENTERTAINMENT, NEXT ENTERTAINMENT WORLD, MEGABOX PLUS M]

After eight days in theaters, “Intimate Strangers,” a relatively small movie that cost just six billion won ($5.38 million) to make, sold more than 2.2 million tickets. In order to break even, the film only needed to sell 1.8 million.

A remake of the 2016 Italian flick “Perfect Strangers,” the Korean adaptation begins with a group of childhood friends gathering at the fancy home of plastic surgeon Seok-ho (Cho Jin-woong) and his psychologist wife Ye-jin (Kim Ji-soo). Once Seok-ho’s friends and their spouses gather at a large table to enjoy a homecooked dinner, Ye-jin suggests playing a game that requires everyone to reveal every text, phone call and social media notification that pops up on their smartphone during dinner.

This puts everybody in an uncomfortable spot, but their desire to not be accused of having secrets - especially by their spouses - eventually leads them all to agree to play.

Directed by Lee Jae-kyu of “The Fatal Encounter” (2014), the film co-stars Lee Seo-jin, Yoo Hai-jin, Yum Jung-ah and Yoon Kyung-ho. It defied expectations and topped Korea’s box office for two weekends, though the streak is likely to be broken this week by new releases like “Fantastic Beasts: The Crimes of Grindelwald.”

“Intimate Strangers” is the latest in the trend of Korean remakes of foreign films, many of which have proven to be box office successes.

“Believer,” based on the 2014 Hong Kong title “Drug War,” sold 5.06 million tickets, while the heart-wrenching romance title “Be With You,” released in March and based on the 2005 Japanese hit film of the same name, sold 2.6 million admissions.

“Believer” stars Cho and Ryu Jun-yeol, while “Be With You” pairs Son Ye-jin with So Ji-sub as a loving couple with a heartbreaking story.

“Little Forest,” starring actors Kim Tae-ri, Ryu and Jin Ki-joo, sold 1.5 million tickets when it was released earlier this year. The film was originally a novel and a cartoon in Japan.

These locally remade movies all broke even.

Remakes, of course, are nothing new. The 2012 film “All About My Wife” was a remake of the Argentine movie, “A Boyfriend for My Wife” (2008). The Korean version, starring Im Soo-jung and Lee Sun-kyun, sold 4.59 million tickets. The frequency of remakes being produced in Korea, however, has recently increased.

This sudden spike in remakes was not intentional, according to industry insiders.

“Rather than paying attention to finding content to remake, we are searching for an interesting story - whether it be original content or a remake,” said Lim Seung-yong, the head of production company Yong Film, which was behind “Believer” and director Park Chan-wook’s acclaimed “Oldboy” (2003).

“That was what led us to work on ‘Oldboy,’ [which is based on a Japanese manga series], and [the 2010 feature] “The Servant,” [based on a famous Korean folktale].”

Lim’s other successful remakes include “The Target” (2014), which was based on a French movie, and “Luck-Key” (2016), which originally comes from Japan.

Producer Park Cheol-su, who co-runs production firm Film Monster, which was behind “Intimate Strangers,” had a similar opinion.

“Whether the story originates from a movie, webtoon or is original content does not make much difference to producers,” said Park. “There are two things we consider - Do I wish to deliver this story and is it commercially viable?

“After watching the original version of ‘Intimate Strangers,’ I got to question myself on human nature, human relationships and secrets, which are told through the means of cell phones. I was also attracted to the cinematic expression of a series of dream-like events taking place while the lunar eclipse occurs.”

Despite the success stories, producing a remake does not guarantee an easier path to a box office hit because of the heightened expectation.

“The strategy of producing local movies, which are often inspired by and reflect reality or history, seems to be gradually changing,” said film critic Kim Hyung-seok. “I think local filmmakers have built up [sufficient] understanding of how to reinterpret foreign movies that fit into the Korean context. Remake films could contribute in solidifying the film industry in Korea.”

Kang Yoo-jung, a film critic, described the rise in remakes in Korea as a “phenomenon that has stemmed from the depletion of ideas.”

According to Kang, working on remakes likely alleviates the concerns of producers and investors because the original content has proven its commercial viability.

“Only when new stories are born … will Korean cinema grow,” said Kang.