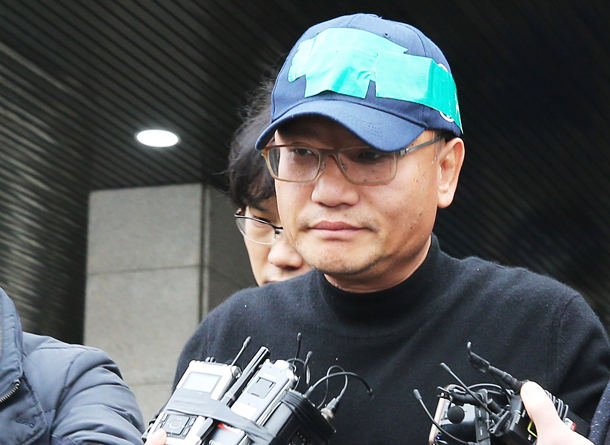 Korea Future Technology chairman Yang Jin-ho, tied up while in police custody, remains silent to reporters as he is transported from the Gyeonggi Nambu Provincial Police Agency in Seongnam to the Suwon District Prosecutors’ Office on Friday. [YONHAP]

Yang Jin-ho, chairman of Korea Future Technology, ran an intricate web of online file sharing companies, all aimed at distributing pornography. He personally oversaw 61 “heavy uploaders” – people who upload a great amount of content to the sites. He is alleged to have made a fortune of around 7 billion won ($6.2 million) from this process, said Chung Jin-gwan, chief of cybersecurity at the Gyeonggi Nambu Provincial Police Agency in Seongnam.

Yang was arrested Nov. 7 on charges of assault and coercion.

Users of Wedisk and Filenori – the file sharing systems that had combined revenues of 55 billion won this year – were ranked in three tiers based on the amount of pornography they uploaded, and the most active of these were given significant financial incentives, police said. One particular heavy uploader made at least 200 million won a year.

Bound with rope and held by officers on both sides, the disgraced executive was transferred to the Suwon District Prosecutors’ Office on Friday after police finalized their investigation. They recommended he be indicted on ten separate charges including tax evasion and embezzlement. Police said they verified that Yang’s withdrawal of 280 million won from Wedisk’s corporate account last March to buy an expensive art piece is behind the embezzlement charge.

Police said they will further question a number of employees at Yang’s companies who allege their boss spied on them by tapping their phones. According to a report by Newstapa this week, Yang forced his employees to install a chat message application on their phones which contained malware that allowed him to monitor their activities.

New testimonials also emerged from the police probe that Yang allegedly sexually abused a woman at one of his numerous residences. Though police have not elaborated on the matter to protect the alleged victim’s identity, they have added a rape charge to their recommendations to prosecutors.

Yang is also accused of consuming copious amounts of illegal substances including marijuana and methamphetamine. Police said Yang smoked marijuana with eight other workers when he ordered the filming of the chicken killing at a company retreat in the autumn of 2015.