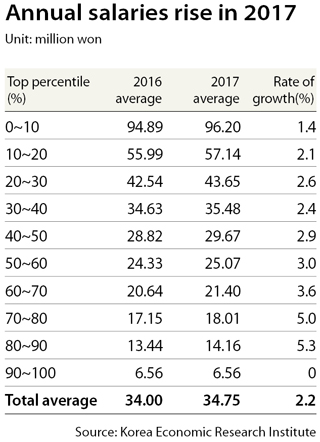 The Korea Economic Research Institute (KERI) reported Sunday that the average annual salary in Korea was 34.75 million won last year, according to data on 15.19 million workers provided by the Ministry of Employment and Labor. The 2017 average was up 750,000 won, or 2.2 percent, compared to 2016, when the average was 34 million won.

The income gap between workers at conglomerates and smaller companies improved slightly from 2016.

“The average annual salary rose overall despite negative external and internal factors like the U.S.-China trade war and challenges in the domestic automobile and shipbuilding industries,” said Choo Kwang-ho, the head of KERI’s Employment Strategy Department. “The salaries of people in the bottom 10 to 30 percent rose by over 5 percent, while salaries of full-timers at SMEs rose. With salaries of workers at conglomerates decreasing by 0.9 percent, the gap between employees of SMEs and conglomerates narrowed.”