Re-evaluating MSG’s place in the Korean kitchen: Some are rehabilitating its image, while others introduce alternatives

Re-evaluating MSG’s place in the Korean kitchen: Some are rehabilitating its image, while others introduce alternatives 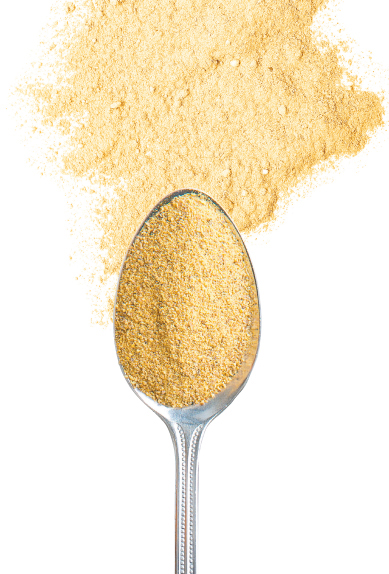 Boiling dried anchovies and kelp or chicken bones and vegetables for hours to make a thick and deep chicken stock are some of the tricks people use to pump up the umami content of their food and make them more savory.

Condiments that include L-monosodium glutamate, or MSG, and other additives help cooks increase the glutamate content of their foods and make them taste richer.

Though MSG is much-maligned, professional and amateur chefs often reach for it when they’re in a pinch.

And what if it could save the lives of countless farm animals sacrificed to create tasty soups?

MSG looks to the young

It has released short commercials showing a cow or a herd of chicken running in nature, saying that they are saved and get to continue their lives because users of Miwon can get the flavors they want from just a pinch of Miwon.

The commercial instantly became popular on YouTube and racked up 800,000 views within two weeks.

It has also set up large advertisements on buildings in the busy City Hall area in central Seoul and Gangnam Station in southern Seoul, where younger people often spend time.

The poster near Seoul City Hall displays chickens and reads “I saved 100 chickens today thanks to Miwon.” The similar one with a cow is hung in a building close to Gangnam Station.

The advertisement intends to show that just a bit of Miwon can help food taste better and even save animals.

“The communication we are targeting to do is with young people,” said a manager with the company’s communications team. The company uses Kim Hee-chul of popular boy band Super Junior as a model.

“Young people are relatively uninformed about what MSG is, so we are showing what options are out there so that they can choose our products when they feel like they need to use something when cooking.”

Purchases of Miwon for home use make up about 40 percent of the company’s total sales each year, and the company believes it is important to introduce new costumers to MSG.

The commercial featuring Kim was the third one that specifically targeted young people. The first two focused more on what Miwon and MSG are, introducing the 60-year-old product to younger customers who weren’t aware of it before.

To stop people from overusing it, as it can create a bitter taste, the company also gives out sample packages to young people that have just enough MSG for a single use. To make MSG, first introduced in 1956, more appealing to youngsters, the company redesigned the packages to make them more modern and cleaner, and launched new products in the past couple of years. It also added shiitake mushrooms and other extracts from natural ingredients to make the food additive more appealing.

Some of the food additives available on the market right now. Daesang’s Miwon, middle, the first MSG product introduced on the local market, made its packaging more modern. It also added a hashtag in the cover to invite youngsters to personally advertise their use of the product on social media. Top, Dasida’s previous design of the package. Above, an international version of Sempio’s Yondu, an MSG-free flavor enhancer. [JOONGANG ILBO, EACH COMPANY]

MSG has long been considered something to avoid in Korea.

MSG, which is also found in natural ingredients, has long been widely thought of as something created chemically. However, the Ministry of Food and Drug Safety earlier this year decided not to call it a chemical compound, as MSG is made out of sugar cane extracts.

One physics professor in Japan in 1908 discovered what makes umami, or gamchilmat in Korean. This comes from kelp broth, asparagus, tomatoes or other the products that contain glutamate. He added salt to it to make L-monosodium glutamate. The Food Safety Ministry in Korea explained in a blog post last year that the release of such an item was revolutionary, as ordinary people could get meaty flavor in their soups and other dishes without the need for meat.

About 20 years ago, many companies, wanting to give off a chemical-free image and take the lead in the market started advertising their products’ MSG-free status. This spread the idea that MSG is harmful. Many testimonies about headaches, obesity or indigestion caused by MSG arose. However, the local Food Safety Ministry has said MSG is a safe food additive, and it doesn’t even post a recommended daily consumption limit. Salt or sugar, which people often use to cook, have recommended limits on daily consumption.

“Constant efforts by scientists and those in academia in the past a couple of years mean MSG now appeals more to the general public,” said Park Chung-bae, a food columnist. He added that if MSG really is that harmful, national entities that deal with food safety would have not approved the distribution of products containing it in the local market.

While MSG is safe, that doesn’t mean cook should use it all the time. Food critic Hwang Gyo-ik explains that what a food additive does to a dish is find the balance that’s lost in between different ingredients, rather than creating a new taste.

“When you cook at home, you make broth, you add marinades, just as a recipe you looked at told you, but sometimes the food still doesn’t taste right, and that’s when this food additive comes in handy,” said Hwang, though he said that adding too much could actually hurt the overall taste.

“The use of such things that we are given with advanced technology and scientific discoveries are more about how we use it than whether it is good or bad.”

However, some still argue that the use of these additives can cause problems.

On Oct. 16, which is designated as a day without food additives by the International Organization of Consumers Unions, opponents of food additives gathered in Gwanghwamun Square in central Seoul to encourage food companies to list all the items they used to make their additives so that consumers can make smarter choices.

While some go for healthier options when it comes to cooking food, some people are mostly cutting cooking time. Due to the relaxed stance safety agencies are taking on additives, many seem to be more comfortable using taste enhancers, whether they are MSG or something else.

Left: An advertisement for Daesang, a food company that first introduced MSG in Korea in 1956. Its promotion said using MSG could save a cow if those who cook use just a pinch of its additives, as it provides a meaty taste. Middle: Korean-American or Korean chefs in New York gather together to learn more about how food additives can enhance the flavors of raw ingredients at the newly-opened Yondu Culinary Studio in New York last week. Right: A group of people gather in Gwanghwamun Square to increase public awareness of food additives. While the group acknowledges that the food additives work as something positive, they argue that consumers need to know more about what goes into their food. [JOONGANG ILBO, SEMPIO, YONHAP]

Kim Hye-jin, an interior designer who often cooks at home, rarely uses much to season her food, but she does occasionally use food additives from time to time to prepare her own meal. She says it saves the time and energy she would otherwise have to spend to create a dish rich in gamchilmat. She can create a similar taste with a little drop of her favorite seasoning, Yondu. It’s an MSG-free alternative that is billed as creating richer flavors in food.

As many people believe restaurants use huge amounts of flavor-enhancing food additives, many people aren’t scared of just using a touch when they cook at home.

“Just a little drop makes the seasoning perfect and some of the different flavors added, such as cheongyang pepper, [into the plain food additive], makes it a good substitute to make something spicy when there is no hot pepper to use,” said Kim.

Sempio, known for its variety of soy sauce products made for different uses, such as soup or steamed vegetables, opened Yondu Culinary Studio in New York in order to better promote Korean-style taste enhancers last week. Yondu is an MSG-free vegetarian seasoning first introduced in 2010. It is based on the fermented flavors of traditional Korean sauces, which naturally contain savory flavors, but can be conveniently added to dishes like an MSG-based flavor enhancer.

Many chefs around the world are focused on developing techniques and skills for fermentation. Korean food is often considered to be a leader in this now-hip culinary technique, with its history of fermented sauces such as gochujang (hot pepper paste), doenjang (soybean paste) and soy sauce.

To better communicate with chefs and consumers who may not have a deep understanding of the sauces and what flavors of raw ingredients it can enhance with the sauces. The company has hired Jaume Biammes, who worked at Alicia Foundation in Spain, to help commercialize the Korean sauce from a global point of view.

“Yondu is a jang or a sauce that didn’t exist before, but has its root in traditional Korean taste,” Sempio said in a press release.

Many chefs from now bring some seasonings widely used in Korea whenever they have a lunch or dinner event overseas in order to encourage international chefs to use Korean products. Those are not just for cooking Korean food but works as a general flavor enhancer.