Controversy over athletes’ falsifying their community service records escalated on Monday after a local cable news channel reported that judoka An Ba-ul, an Olympic silver medalist, also fabricated his records. 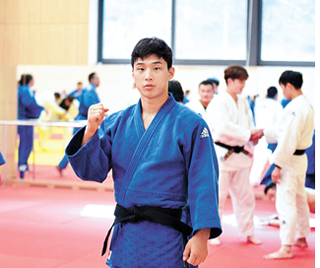 An Ba-ul poses for a photo at Jincheon National Training Centre in North Chungcheong. [YONHAP]

Winners of any Olympic medals and Asian Games gold medals are exempt from mandatory military service, but they are required to conduct 544 hours of sports-related community service over 34 months.

Earlier this month, football player Jang Hyun-soo was permanently banned from the national team and slapped with a 30 million won ($26,640) fine by the KFA after he was found to have doctored his community service records.

An, 24, took silver in the men’s 66-kilogram (145.5 pound) division judo competition at the 2016 Rio de Janeiro Olympics. He was enlisted as a military sports personnel later and started his community service in Nov. 2016.

According to YTN, An reported that he had completed community service at his alma mater on a day that he was training at the national training center in Jincheon, North Chungcheong.

“I did speak with An, and it looks like he wasn’t able to do the paperwork thoroughly because of his training,” Sun Chan-jong, An’s coach and a director at the Korea Judo Association, said. “It’s not that An did it on purpose, but it appears that he took it too easy on the administrative work.”

Sun added that An is an exemplary athlete who did community service even before he was enlisted as sports personnel.

An, who also won gold at the 2018 Jakarta-Palembang Asian Games, has yet to speak out on his community service controversy. Able-bodied Korean men are required to serve in the military for about two years. By law, the medalists are entitled to exemptions in recognition of their contribution to the country’s reputation and prestige.

They need to complete basic military training, which can take up to 60 days, as well as 544 hours of sports-related community service over 34 months.

The KJA said it decided to kick out An from the national training center in Jincheon, adding that he will also not represent Korea at the Grand Slam event in Osaka, Japan, this week.