License plates could be getting fresh design

License plates could be getting fresh design 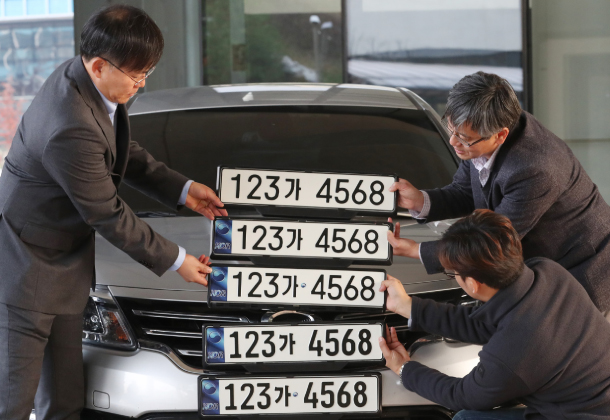 Officials from the Ministry of Land, Infrastructure and Transport compare the new license plate designs at the Sejong government complex on Nov. 16. [YONHAP]

The Ministry of Land, Infrastructure and Transport is conducting an online survey on its website through Dec. 2 on the design of passenger vehicles’ license plates, as a new numbering system will be introduced next September.

People who take the survey can choose from five different designs, including keeping the current design.

The four new choices all include a blue design format on the plate’s left side with the Korean flag symbol on top, the abbreviated “KOR” on the bottom and involve a font change and/or an inclusion of a symbol in the center of the plate.

The first new choice is the current design with the Korean flag symbol and the “KOR.” The second adds a symbol in the center of the plate. The third has a new font without the symbol, while the final choice has both the font change and the symbol.

The Transport Ministry explained that the new designs were the result of joint research between professional road safety institutes. The Ministry also said the new designs include features such as a hologram to prevent counterfeiting and a reflecting film that improves nighttime visibility.

Should a new design be decided, the ministry said it is planning to give drivers a choice of continuing to use the current design as the new film coating could increase the cost of the plate.

“We will meet the various requests of the public by improving vehicle registration plates, and work towards establishing a safe driving environment by implementing measures to prevent counterfeit plates and nighttime accidents,” said a Transport Ministry official.

The Ministry said the survey will be complemented by a Gallup Korea poll conducted over the same period, from yesterday to Dec. 2. The final design will be announced by the end of this year based on the survey and poll results.