Wanna One hopes latest album is a gift to loyal fans

Wanna One hopes latest album is a gift to loyal fans 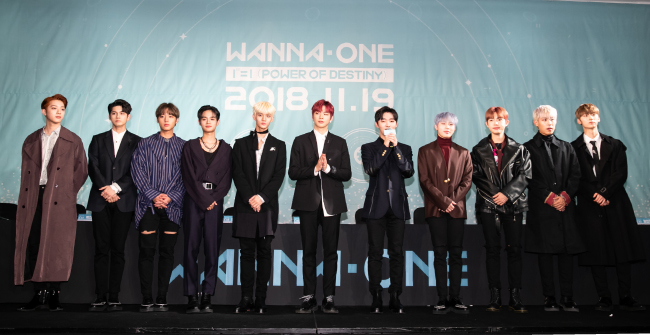 Wanna One meets with local press in Seoul on Monday ahead of the release of their album “1¹¹=1 (Power of Destiny).” [THE FORTUNE ENTERTAINMENT]

A few hours ahead of the release of what might be their last album, Wanna One held a press conference at Conrad Hotel in Yeouido, western Seoul, on Monday to talk about their upcoming goals and their end-of-the-year plans.

“The album [“1¹¹=1 (Power of Destiny)”] expresses the willingness of two separate persons - ‘You’ and ‘I’ - who fight against destiny and come back together in the end,” explained group leader Yoon Ji-sung.

The members made it clear throughout the conference that the album is a gift to their fans, who are known as Wannable.

“We wanted to give a special gift to our fans,” said member Ong Seong-woo. “A true gift is one that the receiver wants to keep forever.”

Despite concerns from fans that this will be the group’s last album before the end of their contract in December, it seems like the members are not ready to say good-bye just yet.

“I think it’s too early to discuss our end,” said member Lee Dae-hwi. “We have not yet discussed about our end [with our agency] and we will probably do so after we finish our activities.”

However, the group did talk about their end with each other, according to member Kang Daniel.

“During our trip to Thailand, we talked about how this could be our last trip together as a group,” he said. “But we were happy to have done everything we have shared together. We also talked about going on a trip together next year with those who have time.”

“Our goal is to do and show our best until the very end,” member Bae Jin-young added. “We want to impress our fans with our performance.”

The release of the album was not an easy one however, especially after John Cameron Mitchell, the director and star of the movie “Hedwig and the Angry Inch” (2001) expressed disappointment in the album’s teaser video last month. The album’s lead single was also leaked at the beginning of the month.

The members were reluctant at first to talk about the controversies.

However, they mentioned that they were not aware of the leak at first, and that it is currently under investigation.

Regarding the “Hedwig” controversy, Yoon expressed that it is hard to explain as people have “different opinions and perspectives” about Plato’s concept of the “Origin of Love.”