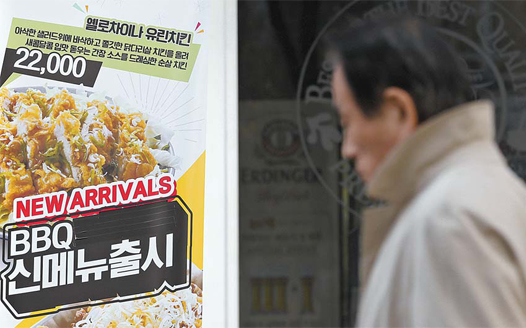 A pedestrian walks by a BBQ restaurant in Seoul on Monday. Major fried chicken franchise BBQ increased prices for three of its most popular fried chicken dishes by 1,000 won to 2,000 won (＄0.89 to ＄1.78). [YONHAP]

BBQ is one of the top three local chicken franchises. The company attempted to raise product prices twice last year but failed due to government pressure or backlash from the public.

The last time BBQ hiked product prices was in 2009.

Some BBQ franchise stores charge customers an additional delivery fee of 2,000 won. This means the price of the three products targeted could break 20,000 won for some BBQ customers.

“The main motivation for the hike was requests from store owners,” said a company spokesman. “The matter was decided through a discussion committee comprised of franchise owners and headquarters staff.”

Franchise headquarters frequently raise the price of ingredients sold to franchise stores when raising the retail price of products, but the spokesman said this time that the hike would only apply to customer prices.

Rising prices of chicken products is a sensitive issue for Korean customers. Fried chicken is one of the most popular home delivery foods in the country, and attempts to charge more for chicken meals in the past have been met with strong complaints, including boycott movements.

BBQ made announcements to raise prices twice last year, in May and June, but it eventually withdrew the decision both times due to public backlash and pressure from the government.

The Fair Trade Commission (FTC) launched investigations into BBQ after it announced increases. Industry insiders said this was a signal to cancel the price changes.

Other top chicken franchises Kyochon and BHC haven’t decided to raise prices. But based on their past actions, increases remain a possibility.

Last year, they both announced adjustments upwards following BBQ, but retreated and lowered prices after the FTC started its probes.

The chicken franchise owners say that price increases are a matter of survival.

Rents have steadily increased while the government raised the minimum wage by 16 percent this year and is planning to raise it by another 10 percent next year. The increasing popularity of delivery apps over the last few years has also contributed to the cost pressure.