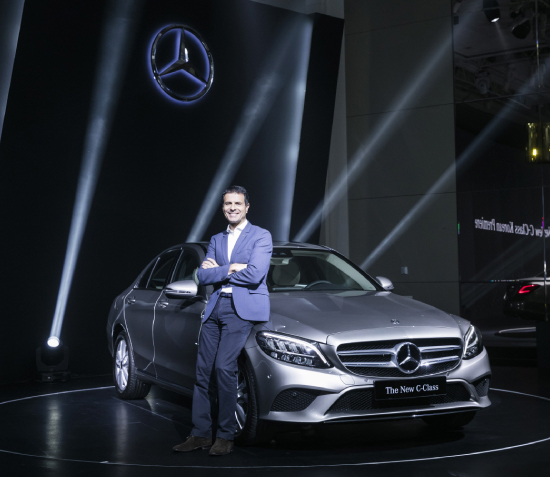 Mercedes-Benz Korea is still committed to diesel despite a global shift to eco-friendly engines, such as hybrid or electric units.

The Korean section of the German premium carmaker premiered a partially revamped model of its flagship C-Class sedan in Incheon on Friday, equipped with a diesel engine.

The C-Class sedan is one of Mercedes’ biggest models, having sold 9.5 million units worldwide since its introduction in 1982. Korea is the seventh largest market for the C-Class.

Although not a fully revamped version, some 6,500 parts, including engine parts, have been upgraded, the company said.

“This diesel engine’s CO2 emissions are 15 percent less than the petrol engine [with the same 2.0-liter capacity],” said Jochen Betsch, head of advanced engineering diesel at Daimler, who gave an extensive presentation on the upgraded diesel engine at a press event Friday in Incheon.

Even while shedding 16 percent of its weight, the new engine added 24 horsepower to generate a maximum of 194 horsepower and torque of 40.8 kg.m.

“It gets quite obvious that Daimler has strong commitment for diesel,” Betsch said.

Dimitris Psillakis, CEO of Mercedes-Benz Korea, said a version with a gasoline engine will launch in the first half of next year, followed by a plug-in hybrid engine.

“A diesel engine has its strong points with performance and even CO2 emissions,” Psillakis said. “It is important to offer all the options out there to our customers.”

The press event Friday included an extensive presentation on the upgraded diesel engine, a move that many saw as a reference to rival BMW diesel models that experienced a spate of fires in Korea last summer. Psillakis, however, denied such speculation, saying the “customers have the right to know about the improved features of the new diesel engine.”