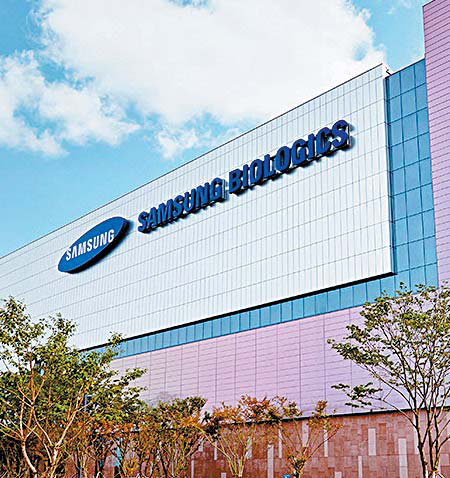 Minority shareholders of Samsung BioLogics are responding to the financial regulator’s ruling last week to suspend trading in the stock, lodging a suit against the company’s accounting firm and the company as well as filing petitions.

After the Financial Services Commission (FSC) slapped a fine on Samsung BioLogics and suspended its trading on the main Kospi on Nov. 14 due to accounting fraud by the biopharmaceutical company, shareholders are now stuck with the shares - for as long as a year.

The minority owners of Samsung BioLogics hold a significant number of shares. According to Chaebul.com, a portal dealing with the chaebol, the number of shares held by minority shareholders is estimated to be 9.602 million, or 14.53 percent of the total, as of Nov. 14. At 334,500 won ($297) a share, that translates into about 3.21 trillion won.

As of Monday, Samsung BioLogics ranked eighth in terms of market capitalization on the Kospi.

Hankyul, a Seoul-based law firm, said last week its Samsung BioLogics shareholder clients will file a suit claiming damages against the company as well as against its accounting firm, Samjong KPMG, later this month at the Seoul Central District Court.

The firm is representing nearly 300 plaintiffs, and 200 more could join.

“[Our clients] have been dealt a blow because they bought shares that they wouldn’t have bought or would have bought at lower prices if it had not been for the accounting irregularities,” said Kim Kwang-joong, a lawyer in charge of the case at the law firm.

He added that the suit could take two years.

Shareholders of other companies engaged in accounting misdeeds have filed suits in the past and received compensation. In the case of Hansol Seentec, currently in rehabilitation, they won in a similar case in 2016 and received some 70 percent of the damages claimed.

Some shareholders made postings on the petition bulletin board run by the presidential office. When a single petition is signed by 200,000 people in 30 days, the Blue House is supposed to make an official response.

One petition claims that the FSC’s decision could “distort the market and break the confidence in related industries.”

Another petitioner said, “Samsung BioLogics was listed without any problem, and the FSC considered the accounting procedure lawful, but now that the administration has changed, the company is considered to have violated accounting rules. What kind of a country is this?”

Some postings said that Samsung BioLogics should be delisted. One petition said, “Korea and its financial authority must set the right precedent to prevent the country from becoming financially corrupt.”