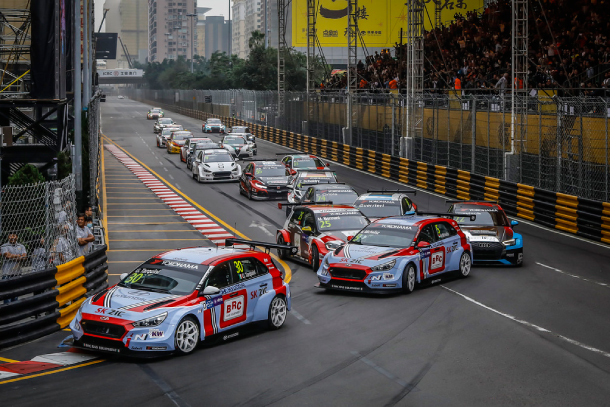 Hyundai Motor finished second for the third year in a row in the World Rally Championship (WRC) series, which ended Sunday with the last event in Australia.

The carmaker took the top spot at the World Touring Car Cup (WTCR), which was held in Macau and also concluded Sunday.

In the WRC, the Korean carmaker managed to narrow the gap with the leader, but wasn’t able to achieve victory.

Hyundai Motor said Monday that its team, named Hyundai Shell Mobis, came in second at the 13th running of the WRC. The carmaker’s comprehensive point total was 368.

Hyundai Motor has been participating in the WRC since 2014. The race is part of its long-term plan to upgrade its image from value-for-money car maker to dynamic enterprise.

Developing the high-performance division is a key item on the agenda for the auto group’s chief vice chairman, Chung Eui-sun. He hopes to strengthen the brand in the competitive and choosey European auto market.

Hyundai Motor set up a separate division dedicated to high performance cars in March and appointed Thomas Schemera, from BMW’s M brand, to run the business.

In WRC events, the carmaker participates with its own team. In WTCR events, it supplies its models to professional racing teams. It races in the “Customer Motorsports” category with Audi, Volkswagen and Ford as some of its competitors.

“This year, Hyundai Motor was able to show motorsports fans around the world its high-performance car technology,” said Thomas Schemera, head of Hyundai Motor’s high performance and motorsport division in a written statement.

“It was also the year that showed the Hyundai Motor N brand could reach a high level in terms of technology in a short period of time.”