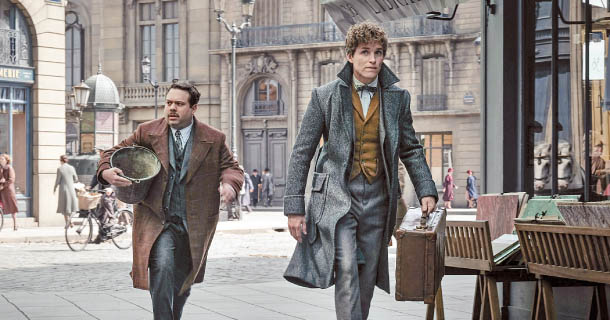 “Fantastic Beasts: The Crimes of Grindelwald” debuted at the top of Korea’s weekend box office, while “Bohemian Rhapsody” came in at second for its third consecutive week. [WARNER BROS. KOREA]

The second installment of the magical “Fantastic Beasts” franchise enchanted the domestic box office in its debut weekend, selling more than a million tickets in three days. Its performance, however, was not as impressive as had been expected, partly due to the enduring popularity of the Freddie Mercury biopic “Bohemian Rhapsody,” which finished the weekend in second place.

“Fantastic Beasts 2,” the J.K. Rowling-penned and David Yates-directed fantasy movie, sold 1.02 million tickets at 1,576 screens from Friday to Sunday, according to the data provided by the Korean Film Council on Monday.

The movie begins with the dark wizard Gellert Grindelwald’s (Johnny Depp) escape from the custody of the Magical Congress of the United States of America. He then attempts to build a loyal following to destroy the peace that exists between magical beings and ordinary people. Newt Scamander (Eddie Redmayne), Jacob Kowalski (Dan Fogler), Tina Goldstein (Katherine Waterston) and the younger Albus Dumbledore (Jude Law) join forces to prevent Grindelwald from creeping into the wizarding world.

In its third weekend, “Bohemian Rhapsody” sold an impressive 816,000 tickets at 1,179 screens. Though the movie has yet to top Korea’s weekend box office since Oct. 31, it has had a steady performance in theaters.

The story about the band’s rise to fame and popularity, as well as Mercury’s struggle with drugs and being open about his sexuality has sold a total of 3.14 million tickets so far.

Its performance is expected to last a little longer, partly thanks to the upcoming special screening at select locations at theater chain Megabox on Saturday to commemorate the death of Mercury.

“Intimate Strangers,” which topped the local weekend box office for two consecutive weeks, dropped to the third spot. In its third weekend, the remake of the Italian feature, “Perfect Strangers,” sold nearly 500,000 tickets, bringing its total ticket sales to 4.35 million. 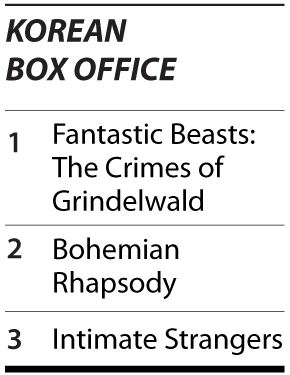 Starring Yoo Hai-jin, Cho Jin-woong, Lee Seo-jin and Yum Jung-ah, the movie unfolds as a group of childhood friends and their spouses gather one night for a dinner and play a strange game of revealing every text, phone call and social media notification that pop up on their smartphones throughout the dinner. The game, of course, results in disaster, causing feelings of betrayal and disappointment.

“Burn the Stage: the Movie,” which is an extension of a YouTube series that goes by the same name, caused a sensation among its fans upon its release and sold 160,00 admissions in its first weekend.