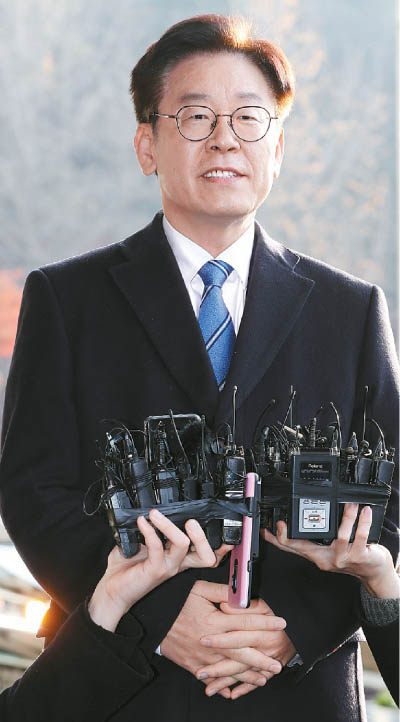 Defending the missus - Gyeonggi Gov. Lee Jae-myung makes an official statement to the press concerning a police investigation into his wife’s alleged defamation of his rivals over Twitter. [YONHAP]

Gyeonggi Gov. Lee Jae-myung struck back at mounting calls for his resignation in an official statement on Monday, denying the police’s conclusion that his wife defamed his political rivals over Twitter.

“My wife is not the owner of the Twitter account,” Lee told reporters in front of the Gyeonggi provincial office in Suwon. “Despite the fact that there is overwhelming evidence to the contrary, the police assembled a handful of tangential hints to conclude my wife is the offender.”

On Sunday, the Gyeonggi Nambu Provincial Police Agency announced that the Twitter account belonged to Kim. The account attacked political rivals of Lee, such as President Moon Jae-in and Rep. Jeon Hae-cheol. Lee ran against Moon in last year’s Democratic Party presidential primary and against Jeon in the Gyeonggi gubernatorial election this June.

Some posts included highly offensive language that mocked the suicide of former President Roh Moo-hyun and the victims of the Sewol ferry sinking.

Online activists had long claimed the account belonged to Kim, citing a photo uploaded by the handle that they claimed could only have been obtained by someone very close to the governor. The probe only began in April after Jeon filed an official complaint with the police against the account on the grounds of defamation.

The conclusion to the eight-month probe on Sunday incited a political earthquake, with opposition politicians raining down criticism on the governor and demanding that he resign. Even members of Lee’s own party, the ruling Democratic Party, have suggested that he should step down if the allegations prove to be true.

Police officially handed the case over to the Suwon District Prosecutors’ Office on Monday and recommended that prosecutors indict Kim on charges of defamation and violation of election laws. In his statement to the press, Lee called the investigation a “dirty political attack,” claiming it was aimed at preventing him from doing his job as governor.

“If the police had put in a tenth of the effort they are putting into my investigation to look into the Samsung BioLogics case or corruption among the elite, the country would be ten times better than it is now,” Lee added.

When the police asked for his indictment on multiple criminal charges like abuse of power and spreading false information last month, Lee claimed they were politically biased against him.

“If they want to hurt me, then they should spit on me,” Lee said. “Don’t bring my innocent wife into this fight.”

Lee’s claims were immediately dismissed by the Commissioner General of the National Police Agency, Min Gap-ryong, who said the police’s conclusion on Sunday was the result of a fair and legal investigation.

“Additional investigations will be conducted through a variety of means,” Min told the press at a regular briefing at the police headquarters in central Seoul. “I believe the truth will be revealed in this process.”