Judges vote to impeach some brethren

Judges vote to impeach some brethren

Representatives from all of Korea’s courts attend a gathering at the Judicial Research and Training Institute in Goyang, Gyeonggi, where they deliberated whether to recommend impeachment of judges implicated in a major power abuse scandal. [NEWS1]

Judges from courts across the country gathered Monday and voted to recommend impeachment of any judges implicated in a major power abuse scandal from the past administration that has rocked one of the country’s three branches of government.

A total of 114 sitting judges convened at the Judicial Research and Training Institute in Goyang, Gyeonggi, as part of a regular meeting of representatives from all courts in Korea.

But also on the agenda was a discussion of an unprecedented: whether to strip judge status from any sitting judge involved in a snowballing scandal involving favors for the impeached and removed Park Geun-hye administration.

The resolution was submitted by representatives of the Daegu District Court’s Andong Branch, who argued that impeachment was the appropriate way to respond to threats to the independence of the judiciary by the unconstitutional actions of judges, including Supreme Court justices.

The resolution was adopted by a majority following an hour-long debate. For some reason, only 105 judges voted.

While the resolution itself has no binding power, the decision of the judicial representatives could pressure the National Assembly into passing a law to punish extreme wrongdoing by judges with impeachment.

After the power abuse scandal came to light last year, judges have been scrambling to find a way to restore the public’s faith in the judiciary - though not all agree that impeachment is the way to do that. Sources from the judicial convention say there was significant opposition to the resolution. 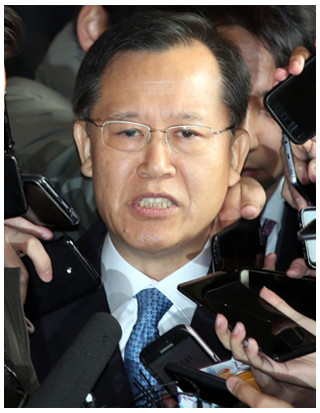 Monday’s gathering took place as prosecutors were in the process of grilling one of those top judges accused of abusing his power: former Supreme Court Justice Park Byoung-dae.

“As chief of the National Court Administration (NCA), I have worked selflessly,” Park said as he stepped into the Supreme Public Prosecutors’ Office in southern Seoul. “It pains me that many judges were hurt and I must be subject to inquiry.”

Park Byoung-dae held the post of NCA chief from 2014 to 2016 and is believed to have helped former Chief Justice Yang Sung-tae win presidential favor by exerting influence in high-profile trials.

The most prominent of the trials involved a damages suit filed by Korean plaintiffs against Japanese companies that had forced them to work during World War II. Park Byoung-dae allegedly met former Blue House Chief of Staff Kim Ki-choon in October 2014 to discuss how to deal with the trial in line with Park Geun-hye’s wishes.

The NCA under his leadership is also believed to have drafted a document in February 2015 that suggested ruling in favor of Won Sei-hoon, a former intelligence chief on trial for spying during an election, as a “conciliatory gesture” toward the Blue House.

The fact that judges on the country’s highest court colluded with the executive branch would constitute a violation of the constitutional principle of separation of powers. In return, Yang allegedly expected Park Geun-hye’s help in establishing a new appellate court to cut down on the Supreme Court’s heavy workload.

In addition, Park Byoung-dae and Yang are suspected of keeping a blacklist of judges based on their political leanings, among a list of other alleged crimes.

Park Byoung-dae’s deputy in the NCA, Lim Jong-hun, has been in custody since Oct. 29 as a key suspect in the case. Prosecutors believe Lim carried out much of the administrative work in committing the misconduct under Park’s orders and supervision. The two were listed as accomplices over 30 times in Lim’s written arraignment following the latter’s indictment last week.

Prosecutors say they plan to bring in another former Supreme Court justice, Ko Young-han, by the end of this month. And depending on how the investigations into these justices proceed, prosecutors are likely to finally summon the central figure in the case - Yang Sung-tae himself.