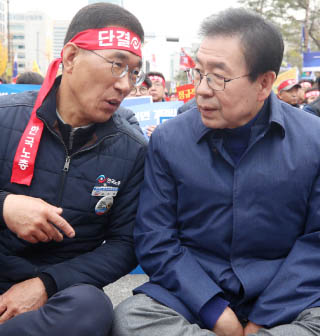 Seoul Mayor Park Won-soon, right, talks with Kim Ju-young, president of the Federation of Korean Trade Unions, at a rally organized by the umbrella labor union in Yeouido, western Seoul, in front of the National Assembly on Saturday. [YONHAP]

Park protested alongside members of the Federation of Korean Trade Unions. The federation, which hosted the rally, said about 30,000 people took part in the rally.

Korea’s umbrella labor unions have been protesting the policy because they believe it will worsen their working conditions.

Moon and political leaders agreed earlier this month to allow companies to increase or decrease maximum working hours depending on the amount of work for up to six months.

For example, a company that makes air conditioner parts could increase its working hours to more than 52 hours a week during the high-demand summer season and correspondingly decrease them during the winter.

The agreement came as businesses struggle to adapt to the shorter workweek, which cut maximum weekly working hours to 52 from the previous 68. Opposition lawmakers criticized Park for taking part in the rally.

“It doesn’t make sense that the mayor from the ruling party would take part in the rally with labor unions in opposition to the Moon Jae-in administration’s policy,” said the Liberty Korea Party (LKP) floor leader Kim Sung-tae in a party meeting on Monday. “If Park is trying to appeal to the unions for his own political gains, he had better watch out. I don’t think he wants to disappoint his DP colleagues just yet.”

“I think Park may be trying to use this movement to boost his standing as a possible presidential candidate in the future,” said LKP Rep. Kim Jin-tae.

The Seoul city government played down Park’s participation in the rally.

“The mayor’s participation had been planned for a while,” a city government official told the JoongAng Ilbo.