South has sent tangerines to North before, to little effect

South has sent tangerines to North before, to little effect 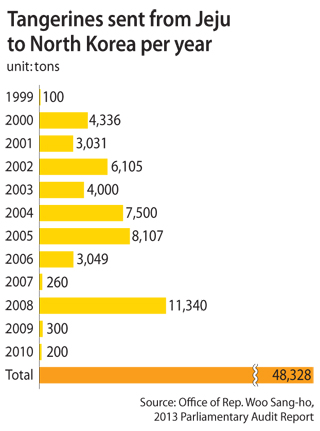 Last week, the government flew 200 tons of tangerines to North Korea on an Air Force plane. The top-secret transfer resembled a military operation more than a gift-giving gesture.

The Blue House said the tangerines were a gift to the North given in return for the mushrooms Pyongyang sent to Seoul following the third inter-Korean summit in September. An administration spokesman said the tangerines, grown in the warm climate of Jeju Island, would demonstrate the South’s compassion to the people of North Korea.

But history suggests that the Moon Jae-in administration’s approach to the North is marred by a fundamental misunderstanding.

Last week was not the first time that tangerines were given to the North. The Kim Dae-jung administration delivered the fruit in 1999, when it was trying to get Pyongyang to come to the negotiation table. Under the Kim government, as well as the subsequent Roh Moo-hyun administration, around 18,100 tons of Jeju carrots were included along with the 48,328 tons of tangerines sent to the North.

The justification given was that the residents of the North would be able to get a taste of Jeju, which would help reconciliation between the Koreas. But in this process, the government spent around 23 billion won ($20.5 million) to buy and transfer the produce.

South Korea’s intelligence agency soon discovered how the tangerines were consumed once they reached the North. Reports were received that the fruits made their way to key elite figures in the North’s ruling Korean Workers’ Party and the military. There was also evidence that Kim Jong-il, the country’s former leader, was dispensing tangerines to subordinates to secure their loyalty. As for the carrots, sources said they were used to make juice and used in dishes served for party cadres at the Workers’ Party dining hall.

When the Lee Myung-bak administration came to power in 2008, it soon shut down aid to the North. According to a source inside the Unification Ministry, then-Unification Minister Hyun In-taek, who was from Jeju himself, came to the conclusion that it was meaningless to send luxuries like tangerines to the North.

This precedent gives analysts reasons for concern when looking at the most recent transfer. Many believe Kim Jong-un, too, will behave like his father and distribute the fruit to gain the loyalty of the establishment. While the Blue House spokesman argues that the sheer size of the transfer was meant to give a taste of tangerines to average resident of the North, intelligence analysts suggest that they will likely go to the powerful.

One defector from the North said that it was impossible to imagine the North Korean government giving away something like tangerines to the people. So far, we have no knowledge of how the tangerines are being consumed in the country. The Unification Ministry says it expects the North will use them wisely.

State-run media in the North has so far been silent on the transfer, and the South Korean government says it has received no response from the North.

The tangerines were sent in cardboard boxes with no labels on them. Without further explanation or context, it would be impossible to know that they were sent from the South. Analysts say the boxes should have had labels identifying them as Jeju products. When the South sent aid to the North in the form of rice in the past, they were in 40-kilogram (88-pound) sacks labeled with the words “Republic of Korea” in large font. The fact that the tangerine boxes were blank suggests the current government is catering to the North’s whims.

Criticism is also mounting regarding the use of military planes for the transfer. Four Air Force-type C-130 carrier planes were used for the operation from Sunday to Monday.

The Blue House said that use of a chartered civilian plane was impossible due to current international sanctions on the North. But they still had the option to send the tangerines via a land route using civilian trucks, rather than getting the military involved.

The most serious issue revolves around the timing of the government’s decision to send the tangerines. The public reacted with fury after it was revealed that Ri Son-gwon, chairman of the North’s Committee for the Peaceful Reunification of the Country, insulted South Korean business tycoons over lunch during the inter-Korean summit in Pyongyang last September.

The Blue House, however, was only concerned about picking tangerines when they are at their ripest in November. The fact that senior Blue House officials know when tangerines are most tasty while being oblivious to public opinion testifies to this government’s lack of public awareness.

It is no surprise, then, that the Moon government’s slogan of “people first,” is being lampooned as “the North Korean people first” these days. The government appears to care more about the North and Kim Jong-un than the economic situation back home.

The criticism isn’t about the willingness to share the South’s delicacies with the people of the North. Sharing what is plentiful and helping one another in times of hardship is a genuine virtue and may prove to be a solid foundation for inter-Korean cooperation. But everything has its time, and the Blue House must listen to public opinion back home.

To receive the tangerines at its airport in Pyongyang, the North Korean government sent the deputy chief of the Committee for the Peaceful Reunification of the Country, the same agency whose chief attacked the South’s business leaders in September. The North’s leaders probably were laughing at the fact that the South sent a bounty of tangerines, in spite of the insults it received. One thing is for sure, this is not the kind of inter-Korean reconciliation that the people have in mind.